"The typical form of this species as it occurs in southeastern Queensland, Australia, is a small tree or a large shrub, sometimes growing as a thorny bush only a few feet in height.   F. M. Bailey described it as "a rigid glaucous shrub of 2 or 3 ft., often armed with straight or incurved axillary spurs of 1/2 in. or under…"   However, Flanders (1932, p. 278) figured a giant tree at Chinchilla, Layton County, in Queensland, some 130 miles west-northwest of Brisbane, that had a single trunk, about 25 feet in height and measuring 20 inches in diameter at 2 feet above the ground.   The round crown was about 28 feet across.   Such a tree undoubtedly grew where its roots had access to ground water.

The leaves are gray-green, very thick and leathery, usually oblong, linear- or elongate-obcuneate, obtuse at the apex, often emarginate, 25-40 X 4-10 mm.   Both surfaces show appressed, grayish hairs and have a thick cuticle with sunken stomata.   The leaves are more or less paraheliotropic (on the edge to the light) and have no clearly defined upper and lower surfaces (Swingle, 1914b, figs. 5, 6, 7).   Flowers very small, 3-5 mm long and 5-8 or 10 mm across, borne singly or in groups of 2 or 3 in the axils of the leaves on slender pedicels, 4-6 mm long, flowers 3-5-merous, with 4 (sometimes 3) times as many stamens as petals, stamens short, filaments slender, 4-5 mm long (sometimes slightly united at the base according to Bailey); pistil short, 3-4 mm long, ovary ovate with 3-5 locules; fruits subglobose or obovoid, 7-12 X 8-10 mm, pulp-vesicles small, subglobose, on short, slender stalks and nearly free from one another; seeds small, oval, 5-6 X 3-4 X 2.5-3 mm, testa rough, monoembryonic.   Young plants growing in the greenhouse at Washington, D.C., had very slender, straight or slightly upcurved thorns, 25-35 mm long but only 1-1.5 mm diam.; young trees growing out of doors at Riverside and Indio, California, show much stouter spines, 2-3 mm diam., but seldom as long as 35 mm.   The twigs on young plants are usually very slender, 1-2 mm diam., and for several years bear very narrow, slender leaves or cataphylls, 18-30 X 1-2 mm, and make very slow growth; as soon as an extensive root system has developed, the young tree grows upward rapidly, producing larger leaves on slightly stouter twigs, 2-3 mm diam., that often show only very short spines or none.

The trees growing at Indio under irrigation began to flower and set fruit when they were 12-15 feet high and about 8-10 years old.   At that age the branches were comparatively short and the trees compact with but little spread (at 20 years of age one tree was 20-22 feet high and the top spread 12-16 feet).   The flowers appear very abundantly in March, and by late May or early June the fruits begin to drop while still green or slightly yellowish-green.   The fruits are juicy, thin-skinned, and rather pleasantly acid.   Two forms occur: one strain has subglobose fruits, the other obovoid or short-ovoid fruits.

The Australian desert lime, Eremocitrus glauca, is a pronounced xerophyte, the only one found thus far in the orange subfamily.   It is able to withstand severe drouth and hot dry winds.   Under such conditions the leaves fall off and the leafless gray-green twigs (resembling those of the smoke tree, Dalea spinosa, and the paloverdes, common in the arid regions of the southwestern United States and northern Mexico) carry on photosynthesis on a reduced scale.   The seedling develops an enormous root system before making vigorous aerial growth and developing full-sized leaves (young seedlings bear only very slender cataphylls).   The roots are able to endure rather high concentrations of salts in the soil moisture and are much less susceptible to boron poisoning than are those of Citrus.   When in a dormant condition this species is able to withstand, without injury, temperatures of ten or more degrees below freezing Fahrenheit (-5.5C or lower).   It probably possesses a higher zero point of growth and, in consequence, a greater dormancy in late winter and early spring than Citrus.   It apparently ranks next to, but does not equal, the kumquats in possessing both winter dormancy and resistance to cold.

There is good reason to believe that Eremocitrus has spread slowly westward in northeastern Australia over a long period of time, probably some 20 million years or more, during which time this plant has become adapted to withstand a semiarid climate and to grow in soils having an appreciable saline content in the soil moisture.   Trees of Eremocitrus glauca have been found growing wild in northeastern Australia up to east longitude 142° 10’, a distance inland of 800 to 960 kilometers (500 to 600 miles).   The western half of this range falls in a region classed as "Dry Steppe" by the Australian experts Andrews and Maze (1933), whose maps show that Eremocitrus grows wild as far west as the climatic zone which according to their designation has an average of from six to eight arid months.   Their No. 8 line (indicating eight arid months in the year), which separates the steppe climate from the desert climate in Australia, runs through the westernmost limit of the range of Eremocitrus.   Convincing proof of the drought resistance of Eremocitrus is found in certain thrifty groves of the desert lime growing in regions in Australia where salt bushes thrive and where trees of some other species die during prolonged drought before the Eremocitrus trees show even slight injury.

In spite of years of effort on the part of several generous Australian cooperators, the attempt to obtain seed from the Eremocitrus trees growing wild in the drier parts of Queensland and New South Wales proved unsuccessful up to 1941.   A few mature fruits were found west of longitude 148°, but they contained no viable seeds.   Fortunately, in December, 1941, C. T. White collected ripe fruits of Eremocitrus glauca containing viable seeds in the vicinity of Charleville, Queensland, in the Warrego River Valley (Long. 147° 40' to 145° 30' E.).   The trees from which the seeds were obtained were growing under semiarid conditions.   These seeds germinated and the seedlings grew well in the greenhouses of the U.S. Department of Agriculture near Washington, D.C.   The complete absence of seed in fruit of this species growing in its natural habitat is apparently the rule, according to information supplied in a letter dated December 2, 1964 to Dr. J. R. Furr, U.S. Date and Citrus Station, Indio, California, from E. C. Levitt, New South Wales Department of Agriculture, Sidney, Australia.   As recently as 1964, the E. glauca trees growing at the U.S. Date and Citrus Station have been the source of seed supplied to Australian citrus specialists for their studies on the suitability of E. glauca as a rootstock and its tolerance to salinity.

Eremocitrus glauca can serve as a rootstock for Citrus aurantium and other species of Citrus; when used for the sour orange excellent growth was obtained in the Washington greenhouses.   Eremocitrus also grafts readily on Citrus." 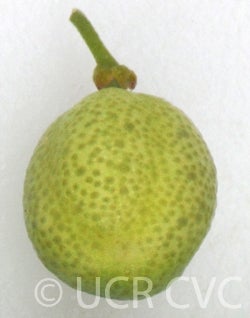 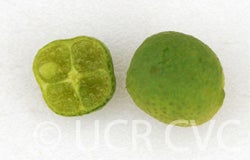 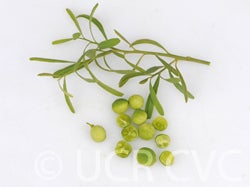 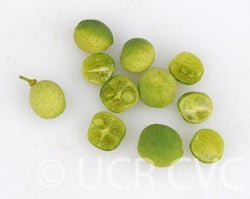 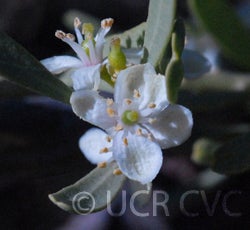 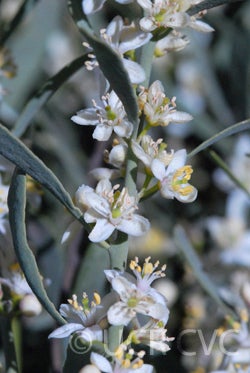 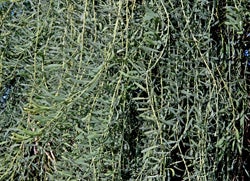