This is not a true Sacaton citrumelo. Fruit is small - 1 to 1.5 inch diameter. Tree shows a great amount of die-back; fruit is yellow, smooth, seedy. (EM Nauer (?), ca 1987)The 3 Sacaton citrumelos in the collection are different from each other. This one is similar to [PI 539826] in external appearance but the rind is considerably thinner. Also, this one appears virtually identical to PI 539816, which is carried as Yuma citrange. (EM Nauer, 11/21/1988)

RRK, 08/08/2012: There are currently three accessions labelled as 'Sacaton' citrumelo, PI 539823, PI 539826, and PI 539827. These were all acquired by the University of California Citrus Experiment Station in 1962, apparently in an attempt to acquire a "correct" 'Sacaton' citrumelo. Contrary to the comment from Ed Nauer shown on PI 539823, the origin of 'Sacaton' is apparently USDA, Texas, or possibly Arizona. The record for inactive accession PI 150921 indicates that it was PI'ed in 1945 from seeds collected from the Experiment Station in Winterhaven, Texas, by WT Swingle. References in the US Date & Citrus Station, Indio, accession book refer to seeds collected in Texas by JR Furr, the actual location in Texas not being stated. Olson et al (1961) report 'Sacaton' present at the USDA citrus collection at Rio Farms, Monte Alto. The Rio Farms tree is stated to have been a seedling planted in 1953 originating in Texas. It is therefore probable that 'Sacaton' originated in Texas (Winter Haven Station) and was then planted at Rio Farms and later sent to the Date & Citrus Station. PI 539826 was received at the CES from Rio Farms and appears to be the best match for the description as it has larger fruit and is seedier than the other two accessions. Note: this tree no longer existed in the 1990's when the Rio Farms collection was observed by Heinz Wutscher and Robert Krueger and John Bash. However, 'Sacaton' might be from Arizona. Swingle was in charge of the citrus breeding program (actually all of CPB) during the time period in which Albert Newcomb suggests 'Sacaton' was developed and could have taken seeds from the Sacaton Station to Winter Haven when Sacaton was closed, PI'ing them only after they arrived in Texas. Better documentation of the origin of 'Sacaton' may be available but is not currently on file at NCGRCD. Note that the suggestion that 'Sacaton' citrumelo and 'Yuma' citrange are the same is supported by Bill Bitters and previous workers. Currently, there seems to be a distinction between the "true citrumelo" (PI 539826) and the smaller fruited 'Yuma' citrange. Some additional observations should be made, a "correct" 'Sacaton' decided upon, and the other two accessions inactivated. Alternatively, 'Sacaton' and 'Yuma' could be consolidated into one accession if original fruit and tree descriptions can be located. They are not currently known to be on file at either NCGRCD or the CVC. 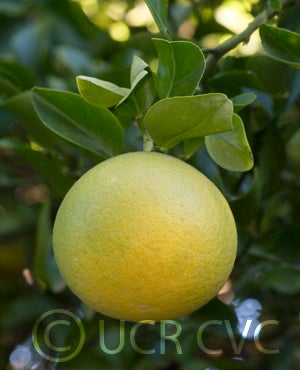 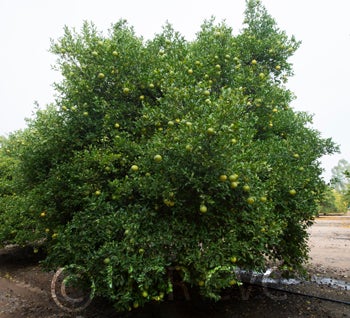 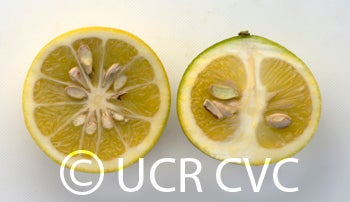