Thought to have been derived from the Santa Teresa lemon.

Crop well distributed throughout year but mostly in late winter and spring.

This was seedling #2; no record whether single or double seedling. Note by visitors from Italy, 1985: This is a major Italian variety.

The oldest and still most important Italian lemon varieties belong to the Femminello group, which according to Burke (1962) accounts for approximately three-fourths of Italian production.  The Femminello varieties are characterized by a pronounced everblooming, everbearing habit which makes them especially responsive to the forcing or verdelli treatment so distinctive of Sicilian lemon culture.  The fruit is of good quality, suitable for both shipment fresh and processing, and the trees are moderately to highly vigorous, upright-spreading, and productive.  Unfortunately, with few exceptions, varieties of this group are susceptible to the mal secco disease.  The two most important varieties of this group are the older Sfusato (see below) and the newer Ovale or Comune.

Because of its regular and abundant production, good shipping and storage quality, and adaptation to the verdelli treatment, Femminello Ovale has long been the principal Italian variety.  Unfortunately it is very susceptible to the mal secco disease.  The comparatively new Santa Teresa variety, which is somewhat similar to Ovale and thought to be a derivative of it, is said to have resistance to this disease." 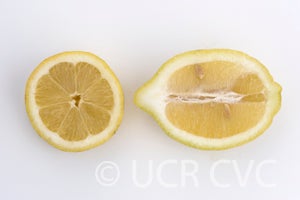 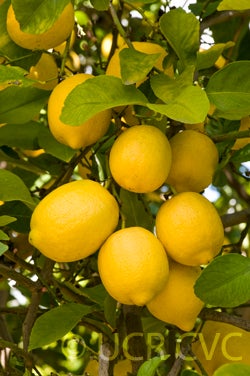