EMN, 1/20/1989: Small fruits turning from green to yellow. Size of a small grape; round, smooth rind. 1 to 3 large seeds. Pulp dull yellow-amber. Flavor acrid- do not try to eat this thing!

The type tree of C. gilletiana was grown in the citrus greenhouse of the former Bureau of Plant Industry from seeds received from Père Gillet in March, 1913.   Unlike C. schweinfurthii, growing alongside in the greenhouse, the young tree did not flower for many years and then only sparingly; later it flowered and fruited profusely.   The type tree produced enormous leaves, both trifoliolate and 5-foliolate.   A trifoliolate leaf at the base of a vigorous water sprout was 28.5 cm long and 31 cm wide.   The terminal leaflet measured 20.5 by 14 cm, the two lateral leaflets 16.5 by 9.5 cm.   The largest leaflets have 7 to 10 principal lateral veins, raised on the under surface and sunken on the upper surface.   The surface of the leaflet is usually more or less bullate because of the upward curving of areas of the leaf surface limited by the principal lateral veins and their cross veinlets.   The winged petiole, cordate in outline, measured 8.5 by 7.2 cm.   A large 5-foliolate leaf higher up on the same shoot measured 37.5 cm long and 36 cm wide; the terminal leaflet (somewhat deformed) was 18 by 10 cm.   The two higher lateral leaflets were 18.5 to 19 by 10.5 to 11 cm.   One of the lower leaflets measured 16 by 10.25 cm (the other was imperfect).   The elongate-elliptical winged rachis segments measured 9.5 by 4.5 cm, the elliptical winged petiole about 10 cm long and about 7.5 cm wide (one side defective).   These are the largest leaves yet reported on either a Near-Citrus or a True Citrus Fruit Tree, though they are greatly exceeded in size by the leaves of some species of Clausena.

In trifoliolate leaves, the terminal leaflet is usually decidedly longer than the adjoining laterals and frequently much wider, from one-fourth to one-third or even more; when the terminal leaflet, as often happens, is borne on a separate winged rachis segment, it is sometimes even two-fifths wider.

The stigma in cross section shows eight small oil glands (two between each pair of stylar canals).   The fruits are often crowded, three to six in a dense cluster in the axils of the leaves of the fruiting branches; they are usually subglobose, 2 to 2.5 cm in diameter, but are sometimes depressed-globose, 2 cm long and 2.3 to 2.4 cm wide; they become yellow-orange and are fragrant when ripe..

Gillet’s cherry-orange, the largest and most vigorous of all the known forms of the genus Citropsis, has been reported by Belgian expert horticulturists and pathologists (Goossens, 1924, pp. 156-62, figs. 42-45: Staner, 1929, pp. 364-66, fig. 170; and Pynaert, 1935, pp. 305-14), on the basis of experiments carried out at the Eala Botanic Garden near Equatorville in Belgian Congo (now the Republic of the Congo), to be immune to a very destructive form or foot rot, supposed to be caused by the brown-rot fungus (Phytophthora citrophthora), that attacks the lower trunks and upper roots of the species of Citrus grown in the Congo, including the sour orange, Citrus aurantium, usually found to be very resistant to foot rot (see Fawcett, 1936, p. 177).   It appears that in the Congo foot rot is greatly aggravated in severity by the larvae of a longicorn beetle, Monohammus sp. (see Goossens, 1924, p. 159, and Staner, 1929, pp. 365-66), which attacks first the cambium layer and later the wood of the base of the trunk.   Citropsis gilletiana, besides being immune to the attacks of the foot-rot fungus, is not attacked by this beetle. It has been found that Gillet's cherry-orange makes an excellent rootstock for the cultivated varieties of sweet orange, mandarin, grapefruit, and lemon which were all found to grow more vigorously when grafted on Gillet's cherry-orange than on sour orange rootstocks.   Furthermore, citrus trees grafted on Gillet's cherry-orange rootstocks were completely immune to the Monohammus beetle and also to foot rot, provided the Gillet's cherry-orange stocks were grafted high enough above the ground to prevent infection from the soil.

Pynaert (1935, p. 313) reported that the native Citropsis growing about the Eala Botanic Garden in Belgian Congo had been introduced into Belgium, and that a Jaffa orange grafted on a plant of Citropsis growing in a greenhouse of the Colonial Garden at Laeken, Belgium, had made a particularly vigorous growth and in 1935, when still only 2 meters high, had produced a number of fruits.   An excellent half-tone figure of the wild Citropsis found near the Botanic Garden in Belgian Congo, published by Goossens (1924, p. 161, fig. 45), shows clearly that this cherry-orange is the same as the one sent to Swingle by Père Gillet from Kisantu, about 700 kilometers down the Congo River from Eala.   It has the terminal leaflet distinctly larger than the laterals, agreeing with C. gilletiana (but not with C. latialata).   Goossens reported that near Eala this Citropsis is a tree growing to a height of 8 to 10 meters (26 to 33 feet) that bears tiny, orange-like fruits, 2 to 2.5 cm in diameter, with a resinous, fragrant pulp in which three or four seeds are imbedded.   The fruits produced by the type tree of Gillet's cherry-orange growing in the citrus greenhouse at Washington agreed very closely with those described by Goossens, and the foliage, spines, and fruit clusters of this type tree resembled exactly what is shown in Goossen’s photograph of the Citropsis growing wild about Eala." 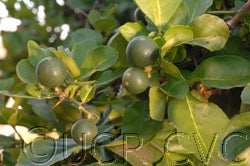 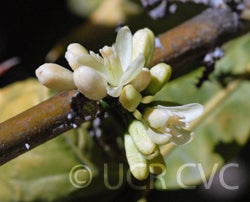 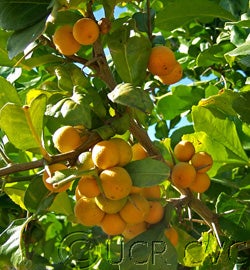 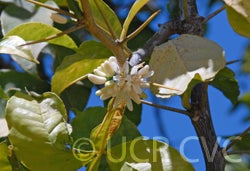