Reported to be the result of a carefully safeguarded cross-pollination of the Eustis limequat with Fortunella hindsii.

Received at CRC as potted plants, J. Carpenter received seeds from USDA, Orlando, Florida. This came in as PI 109765, F. hindsii, but it is apparently not. R.K. Soost notes: Positive 3N (27) chromosome count on this accession; CPB 52446 is triploid hybrid of Eustis limequat X F. hindsii (H. Barrett from Orlando records.) Procimequat is described in TCI, Vol. I, pp 337-338.

"This very interesting complex hybrid, which has a triploid chromosome number, is the result of a carefully safeguarded cross-pollination of the Eustis limequat with Fortunella hindsii, a tetraploid species made by Eugene May and the writer expressly to obtain a triploid hybrid.   Longley (1926, pp. 543-45, fig. 1) found it to be triploid, with 27 chromosomes in the somatic cells (18 supplied by the male parent, the Hongkong wild kumquat, and nine by the limequat).

The limequat fruits have from six to nine segments, as might be expected from a hybrid of the round kumquat (with four to seven segments) with the Mexican lime (with 10 to 12 segments).   The Hongkong wild kumquat fruits have only three or four segments.   The ovaries of the procimequat hybrid under consideration usually show from four to five segments.

The leaves of these hybrids are small but some of them show fairly vigorous growth.   The fruits set abundantly even on small young plants and are small and subglobose, much like those of Fortunella hindsii but a little larger and a much paler orange in color when ripe.   These fruits are not seedless, as was expected, but produce some nucellar bud embryos, as do many citranges after the development of the ovules has been stimulated by pollination.   Triploid limes are usually seedless.

This hybrid is interesting because it throws light on bigeneric Fortunella X Citrus back-crosses such as are possibly represented by the Malayan hedge lime discussed.   The procimequat is in reality intermediate between a true bigeneric back-cross and a trigeneric hybrid, because Fortunella hindsii belongs to a subgenus, Protocitrus, with many important taxonomic characters separating it from the true Fortunella species placed in the subgenus Fortunella. 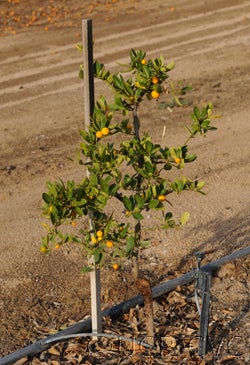 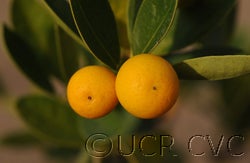