Parents unknown. Believed to have originated from seed that drifted ashore in Yamaguchi, Japan.

From Citrograph 72(2): 29-30, 32, Dec. 1986: Natsudaidai is believed to have originated from a seed that drifted ashore in Yamaguchi Prefecture (Japan) about 1870. It seems to be a hybrid of pummelo and another citrus. In Japanese Natsu means summer and Mikan means Citrus: thus, Natsumikan (synonym for Natsudaidai) means summer citrus. The fruit are large (400-500 g), have a thick skin and 30 seeds on average, taste very sour, and contain 2-3% acid. An early-maturing cultivar that contains only 1-2% acid was found and named Kawano Natsudaidai (this accession) in 1950. Generally, the less-acid type of Natsumikan is called Amanatsu (includes Kawano Natsudaidai).--more information continues in this article.

2/23/1988, EMN: Dr.Bitters says this is NOT Natsumikan and Mikan does not mean Citrus; Fruit is light yellow and rough rinded. Rind relatively thick like a pummelo but flesh is more juicy and melting, like a grapefruit. Sour now to my taste.

5/27/1988, EMN: Decently sweet flavored now, but flesh is coarse appearing and most fruits are granulating, especially at the stem end. This would not be commercial here.

3/3/2008, DK & TS: Tree has large leaves. Fruit has a necked pummelo-like shape; medium to golden orange yellow; rind thick, pebbly, prominent glands; juice vesicles coarse but tender; 8 to 10 seeds; flesh juicy, light orange, sweet, but with an aftertaste. Is this really a sour orange hybrid, or was it just the "daidai" part of the name that suggested that identity? 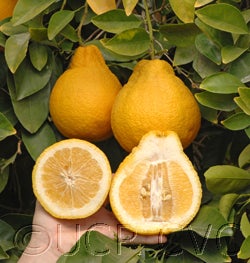 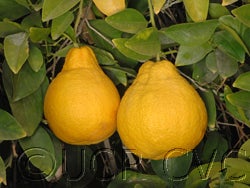