Received as seed by H.B. Frost and this accession is one of the nucellar seedlings, 1915.

Marsh grapefruit originated as a chance seedling around 1860 in Lakeland, Florida.  Because it was the first seedless variety to be promoted, it soon became the most widely planted grapefruit variety.

OJB: The tree grows vigorously to a large size. The fruit is almost round in shape with a smooth light yellow rind.  The flesh is pale yellow, juicy, and tender, with a good flavor.  To achieve acceptable quality, Marsh grapefruit must be grown in locations that satisfy its high heat requirement.  The fruit is late maturing and holds well on the tree.

"This variety is a nucellar seedling of Marsh that was derived by H. B. Frost of the University of California Citrus Research Center, Riverside, from seed planted in 1916.  It was introduced commercially in 1952.  Currently, it is the principal clonal selection of Marsh under propagation in California and South Africa."

"Fruit medium in size, oblate to spherical; areole ring indistinct or lacking; seeds few or none.  Color pale to light yellow at maturity.  Rind medium-thin, tough; surface very smooth and even.  Flesh buff-colored; tender, very juicy; flavor good though not so pronounced as in some seedy varieties.  Holds unusually well on the tree and ships and stores well.  The latest-maturing of all commercial varieties.

According to Webber (1943), Marsh apparently originated as a chance seedling planted about 1860 on a farm near Lakeland, Florida.  Its commercial value as a seedless variety was not recognized until 1886, however, when it was brought to the attention of E. H. Tison of the Lakeland Nursery Company, who immediately arranged for its propagation and introduced it soon thereafter as a choice seedless variety.  A few years later it was given its present name by C. M. Marsh, who had acquired the Lakeland Nursery.  According to Mr. Tison, the owner of the farm on which the parent tree occurred insisted that it developed as a root sprout from an old seedling tree which produced seedy fruit.  While this is possible, it seems highly improbable.

Primarily because of its comparative seedlessness, within a few years after its introduction Marsh became the variety most planted in Florida and virtually the only variety planted elsewhere.  It is still by far the leading variety and is worldwide in its distribution.

Marsh is of unusual horticultural interest not only because it was the first seedless grapefruit variety discovered but also because the pigmented varieties currently of greatest commercial importance trace back to it.  Thus, Thompson (Pink Marsh) originated as a limb sport of Marsh and Redblush (Ruby) or Red Marsh occurred as a bud mutation of Thompson.  On the other hand, Marsh has also given rise to inferior bud variations, frequently characterized by a reversion to seediness.

Other seedless varieties of more recent origin, virtually indistinguishable from Marsh, include Cecily of South Africa and Davis.

Nucellar clonal budlines are currently of importance in Texas, Arizona and California, principal among which are Frost, CES (Citrus Experiment Station, Riverside, California), and USDA (U.S. Date and Citrus Station, Indio, California).  Reed, a seedling that originated in the dooryard of J. F. Reed of Taft, California, is one of the most recent selections to receive attention." 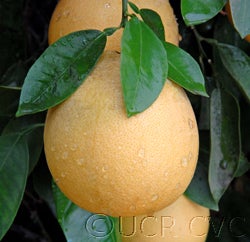 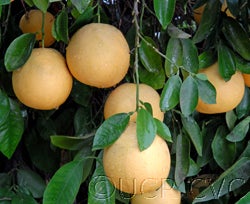 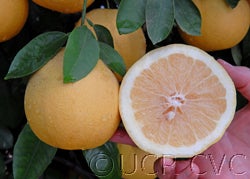