Received as seed by H. B. Frost of the Citrus Research Station, Riverside, in 1917, and was released about 1950.

Seedling from an old-line Lisbon lemon.

Lisbon lemon trees grow vigorously into large, thorny, upright but spreading trees.  Due to their vigorous growth habit, the fruit is usually found within the canopy of the trees.  The new leaves and flowers are tinged with purple.  Lisbon trees produce several crops per year, but the main crop is winter and early spring.  The fruits are medium in size, oblong, with a prominent nipple.  The rind is slightly textured and yellow at full maturity.  The flesh is pale greenish-yellow, low-seeded, and very acidic. There are many named selections of Lisbon lemon, with individual characteristics that distinguish them from the original clone.

"Frost is at present the only known nucellar selection of Lisbon available.  It was derived in 1917 by H. B. Frost of the Citrus Research Station, Riverside, and was released about 1950.  Seedling budlines presumed to be of nucellar origin have recently been derived from some of the most popular California clonal selections, however, and currently are being planted to some extent.

Tree vigorous, upright-spreading, large, thorny, densely foliated, and productive.  Tree most vigorous of varieties grown in California and most resistant to adverse conditions such as frost, heat, wind, and neglect.

The Lisbon fruit is generally smoother and less ribbed than Eureka, the nipple and areolar furrow more prominent, and the taper at the ends more gradual.  The characters are so variable and overlapping, however, as to make identification from small samples uncertain, if not impossible.  The tree is quite different from the Eureka, however, and easily distinguishable.

Lisbon is of Portuguese origin, although it is not known there by that name.  It is believed to be a selection of the Gallego seedling clonal group, which in Portugal is somewhat comparable to the common sweet orange groups of Spain, Italy, and numerous other countries.  A selection known as Portugal in Morocco and Algeria is said to be indistinguishable from the Lisbon introduced from California.

The earliest reference to Lisbon in California appears to be its listing in the 1853 catalogue of Warren and Sons Nursery and Garden in Sacramento.  It was brought to California in 1849 or soon thereafter from Massachusetts by J. L. L. F. Warren, who had listed it in a nursery catalogue issued at Nonantum Vale, near Boston, as early as 1843 (Butterfield, 1963).  It is virtually certain that this variety ultimately reached southern California, for Caryl (1940) reports that budwood from an old Lisbon lemon tree growing in Alameda was shipped to S. P. Stowe of Goleta in 1883.

Two importations are known to have been made from Australia, where this variety was introduced as early as 1824 (Bowman, 1955).  The first was by S. P. Stowe in 1874, who shared his introduction with Thomas A. Garey, a pioneer citrus nurseryman of Los Angeles.  The second was by J. W. North of Riverside, who received a few small trees in 1875 and turned them over to D. N. Burnham, a California nurseryman.

The vigor, hardiness, and high productivity of Lisbon combined to establish its early and enduring popularity, particularly in the California interior districts.  Eureka has been its only rival, principally in the coastal districts, though in recent decades that variety has declined somewhat in popularity in favor of Lisbon.  Although not as widely grown as Eureka in most other lemon-producing countries, Lisbon is unquestionably one of the major varieties.

It early became evident that in California this variety contained several clones which differed in vigor, size and abundance of thorns, compactness of branching, and denseness of foliage.  Principal among these selected for propagation were the so-called "short-thorn," "semidense," and "open" types as well as the "standard" clone characterized above.  Since Lisbon is not regarded as a clonal variety in its country of origin and at least three independent introductions contributed to its propagation in California, the facts strongly support the conclusion that these types or so-called "strains" were contained in the original introductions and that, as a consequence, Lisbon should properly be regarded as a group of clones in California, probably of common parentage, rather than a single clonal variety.  All of the clones currently propagated seem to be of the standard or short-thorn types, both of which are characterized by high vigor and productivity.

In California, the selection of outstanding trees for use in propagation has been widely employed for some decades, which has made possible comparison of numerous individual tree bud progenies.  It is the consensus of the nurserymen that the old budline clonal selections currently most in demand are Galligan, Limoneira 8A, Monroe, Prior, Rosenberger, and Strong, and to a lesser extent Kaweah and Walker.  Selections of importance in the recent past include Bradbury, Cavers, Deaver, Hall, Jameson, Ledig, Price, Prospect, and USDA.  At the time of their selection, the bud parent trees were outstanding in vigor and productivity and were considered to be typical for the variety.

With two possible exceptions—Galligan and Rosenberger—bud progenies are indistinguishable within the normal range of variation produced by environmental and disease factors.  Since the Galligan orchard was planted in 1886 with trees from Florida, which are said to have been ordered as Villafranca, the probability exists that this selection is of that variety.  There is general agreement, however, that Rosenberger differs appreciably from Lisbon in both fruit and tree characters and also from Galligan to a somewhat lesser degree.  Since its bud parentage is uncertain, the writer believes it is best to consider Rosenberger a separate variety of unknown origin.  In arriving at these conclusions, he is aware that they will be strongly contested by some authorities.

Within recent decades, the use of seedling clonal lines has become popular in California and is increasing.  The only known nucellar clonal budline of the Lisbon variety is Frost, which was produced by the geneticist and breeder H. B. Frost at the University of California Citrus Research Center, Riverside.  More recently, what are presumed to be nucellar lines have been obtained from some of the named oldline clonal selections.  A few of these have been propagated and currently are being planted." 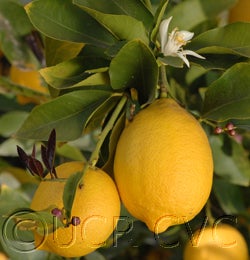 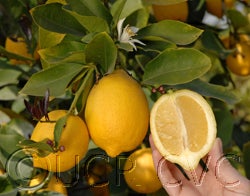