Received as seed from Hiroshi Yoshimura, Univ. of Osaka, Japan, 1956.

From RRK: "The sunki, suenkat or sunkat of South China, which is the sour mandarin C. reticulata, var. austera) of Swingle's classification...is a medium-small, upright tree with distinctive pale-green leaves. The fruit is medium-small, oblate and markedly depressed at both ends, and with basal furrows. The rind is very thin, loose, and light yellowish-orange, with a smooth, shiny surface and prominent oil glands. The rind is strong and spicy with a distinctive aroma. The flavor is acid, the fruit never becoming edible. Seeds are medium-large, plump, polyembryonic, and have pale-green cotyledons.

"Differs from the sweet mandarin orange in having smaller fruits with intensely acid pulp. The type of this variety is the sour mandarin called sün kat in Cantonese, propagated from seed in the Swatow region of Kwantung, where it is commonly used as a rootstock for grafting. G.W. Groff in 1918, in a manuscript report covering his work on citrus done in China under Swingle's supervision for the former Bureau of Plant Industry of the U.S. Department of Agriculture, described the sün kat as follows:

"This variety is widely grown about Swatow, China, where it is used as a rootstock upon which to graft the Ponkan or mi-tong-kan ("honey pot orange") and other famous varieties widely exported from Swatow.

"Probably some of the other sour mandarins called kat by the Cantonese are forms of this variety. Some of the so-called kat varieties with large fruits, which as they ripen may become sweet enough to eat, are probably hybrids between the variety austera and the sweet mandarin, C. reticulata, or the sweet orange, C. sinensis." (Swingle, 1943, p 415; Swingle and Reece, 1967, pp 381-382)

Sunki is widely used as a rootstock in China but has not had extensive evaluation in other areas. It is tolerant of tristeza and xyloporosis but susceptible to exocortis. Sunki is reported to be susceptible to Phytophthora but has survived well in some trials. It is also said to be tolerant of blight-like diseases in Brazil. Trees propagated on Sunki are reported to be highly salt tolerant, moderately cold hardy, and only slightly susceptible to chlorosis on calcareous soils. Trees on Sunki have been reported to be smaller than standard in China and Texas but large in Florida and California. Fruit yield and quality are at least equivalent to trees on sour orange or Cleopatra mandarin. Sunki is polyembryonic but has a higher proportion of zygotic seedlings than many other rootstocks. (Summarized from Wutscher, 1979, p 251; Castle, 1987, pp 373-374; Castle et al, 1993, p 25) 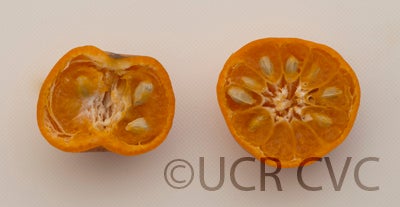 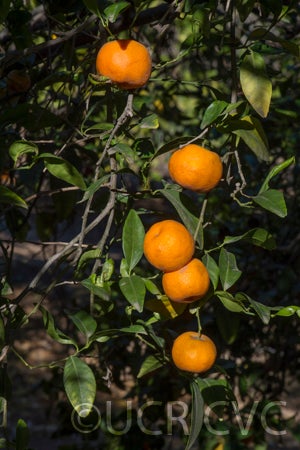