"Bentley and Trimen (l.c.) gave the following description of this species: "A tree reaching a height of 30 or 40 feet when cultivated, with a short thick trunk and narrow oval head; in the wild state smaller and more irregular, with short, strong, sharp, spiny branches 1 inch or more in length in the axils of the leaves; bark bluish-grey, soft, with irregular furrows on the younger branches.   Leaves alternate, compound, with one (rarely 2) pairs of shortly stalked opposite leaflets, and a larger long-petioled terminal one, leaflets 1-2 inches long, ovate or oval-ovate, abrupt or tapered at the base, somewhat attenuated towards the blunt apex, very shallowly serratocrenate, smooth, thin, midrib prominent beneath.   Flowers 3/4 inch wide, sweet-scented, stalked, solitary, or in few-flowered, lax, erect, axillary or terminal cymes.   Calyx shallow, with 5 short, broad teeth, pubescent outside.   Petals 5 (rarely 4), oblong-oval, blunt, thick, pale greenish-white, dotted with glands, imbricate, spreading.   Stamens numerous, sometimes coherent in bindles, hypogynous with short filaments half as long as the linear anthers.   Disk none or very small.   Ovary oblong-ovoid, slightly tapering into the thick short style which is again somewhat thickened upward, stigma capitate, axis of ovary wide, cells numerous, 8-20, small, arranged in a circle, with numerous ovules in each cell.   Fruit usually globose, 2-5 inches in diameter, pericarp nearly smooth, greyish-yellow, about 1/8 inch thick, hard, filled with softer tissue becoming very hard and orange-red when dry; cells as in ovary.   Seeds very numerous, somewhat compressed, ranged in closely packed tiers in the cells and surrounded by a very tenacious, slimy transparent mucus which becomes hard when dry; testa white, covered with woolly hairs immersed in the mucus, embryo with large cotyledons, and a short superior radicle; no endosperm."

Aegle marmelos has dimorphic twigs: (a) normal twigs with internodes 3 to 5 cm long with one well-developed leaf at each node, often with one or two spines alongside; (b) foliage spurs produced on primary branches of the previous year's growth, usually very short, 1 to 3 cm long, with numerous very short internodes, each node bearing a leaf but no spines.   The numerous leaves crowded on the foliage spurs vary greatly in size, the largest being nearly as large as the normal leaves on rapidly growing long-internoded branches but having decidedly longer petioles.   The smaller leaves borne near the base of the foliage spurs are often much dwarfed, sometimes being only one-fifth or one-tenth as long as normal leaves.   These crowded leaves of all sizes often hide almost completely the branches which bear them.

Because of these dimorphic characteristics the bael-fruit tree presents a peculiar appearance, with its long, slender young branches with only a few leaves scattered along them arising from an inner crown of older branches almost completely covered with massed foliage borne on the leaf spurs.   Poncirus trifoliata has somewhat similar dimorphic branches and leaves but shows much less variation in the size of the leaves produced on the leaf spurs.

Besides this dimorphism of twigs and leaves, Aegle marmelos shows great variability in both kinds of leaves on different seedling trees, not only in size but in important botanical characters, such as the presence or absence of a separative layer at the junction of the terminal leaflet with its petiolule, the relative length of this petiolule and of the petiole, as well as the length of the petiole in relation to the length of the entire leaf.   The petioles on some trees have distinct wings on each side for almost their entire length and on other trees show only two inconspicuous green lines broadened into very narrow wings at the upper end of the petiole.   The leaflets vary greatly on different seedling trees in marginal crenulation and flatness or curvature of their surface.   There is also great variation in the posture of the leaves on the twigs which bear them and the degree to which the blades, petioles, and supporting twigs show reddish coloration where exposed to sunlight.

These surprising diversities in leaf characters were studied by Swingle in October, 1941, on some thirteen fruiting trees growing at Coconut Grove and Homestead, Florida, and convinced him that it would be necessary to make a detailed study of both wild and cultivated bael-fruit trees in India.   The extraordinary variation in taxonomically significant characters shown by the trees grown from seeds imported from India very probably means that there are several different strains, botanical varieties, or even good species to be found among the wild plants growing in the mountains of northern India.   Seedlings of these diverse wild forms planted together in the villages would doubtless be cross-pollinated by insects and produce complex and highly variable hybrids like those we find growing in Florida.

For many years few or no fruits of Aegle marmelos were produced by trees growing in the continental United States, but now the trees in southern Florida have fruited freely.   S. J. Lynch, former horticulturist of the Subtropical Branch Station of the Florida Agricultural Experiment Station at Homestead, found that many bael-fruit trees in southern Florida were suffering from zinc deficiency.   Application of small amounts of zinc sulphate caused them to make a vigorous new growth with green (not yellowish) leaves and favored the setting and maturing of a good crop of fruit.

The Hindus esteem the ripe bael fruit very much; in fact, many of them consider it to be the best of the citrus fruits.   Some European residents of India have been known to develop a decided liking for it.   Watt stated (1889, vol. 1, p. 123): "The fruit, when ripe, is sweetish, wholesome, nutritious, and very palatable, and eaten by all classes.   The ripe fruit diluted with water, forms with the addition of a small quantity of tamarinds and sugar, a delicious and cooling drink."   Concerning its medical value, W. R. Mustoe, then superintendent of the Government Archipelago Gardens, Lahore, India, wrote to David Fairchild on December 3, 1908, as follows: "All Indian medical authorities agree that the Bael fruit has a most salutory influence on the digestive system.   The ripe fruit is mildly laxative and is a good simple remedy for dyspepsia.   The unripe fruit is a specific of the highest value for dysentery so mild that it can be given to children without danger."   Roxburgh stated (1795-1819, vol. 2, p. 23, pl. 143): "The fruit, delicious to the taste and exquisitely fragrant, is not only nutritious, but possesses a laxative and aperient quality, confirmed by experience, which renders it particularly serviceable in habitual costiveness."

The wild forms of Aegle marmelos have small fruits (5 to 7.5 cm in diameter), whereas in cultivated forms the fruits may attain a diameter of 12.5 to 17.5 cm.   According to Davis (1930, p. 111), in its wild or semi-wild state the bael-fruit tree grows freely in the Bahraich Forest in northern India (one of the northern districts of Oudh, in Uttar Pradesh State to the south of Nepal), even on poor clay soils where other trees fail.   In view of the widespread use of the fruit in India both for food and for medicine, it is very desirable that this species be tested in the United States.   Fortunately it is easily propagated from seed and from layers.   According to Turner (1893, p. 152), A. marmelos has been successfully fruited in northeastern New South Wales as far south as the Clarence River (about Lat. 29° 30' S.).   It has for some time fruited in the warmer parts of the United States, and it is almost certain to succeed in Puerto Rico and Hawaii.   In extreme southeastern Florida this species has been grafted successfully on Aeglopsis chevalieri and on Afraegle gabonensis, both of which are rather closely related plants that grow vigorously in the sandy-loam, porous-limestone soils found in this region.

Although the bael-fruit tree grows commonly in tropical climates, it loses its leaves in winter when in a cool climate; moreover, it is able to endure low temperatures in India when in a leafless condition—as low, it is said, as 17.5° F (-8° C).   It is possible that, like many other deciduous trees, it must be exposed to the proper degree of cold over a long enough period for food materials stored in the trunk and twigs to be rendered available to support the new growth in early spring." 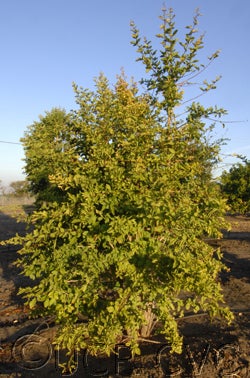 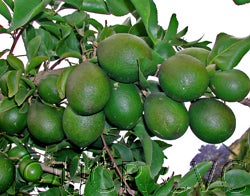 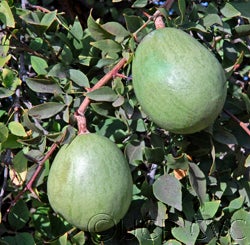 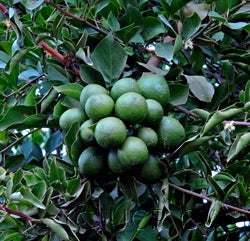 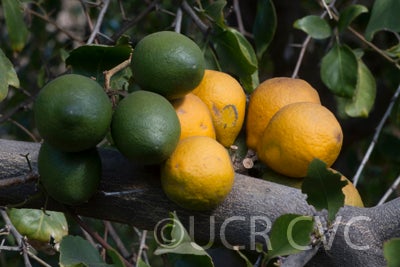 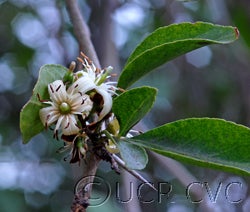