Parents unknown. In India Gadadehi is said to be a variety of sour orange; it is possible that a mixup in the seeds originally sent resulted in this accession being a pummelo hybrid.

3/1987, EMN: Appears to be a grapefruit or pummelo hybrid with thick rind & many seeds; is a large, puffy & rough yellow fruit. Leaves have very little petiole wing.

2/24/1988, EMN: This season there is a heavy crop of grapefruit sized fruit; these fruit resemble grapefruit but have rougher and thicker rind. Let's put this accession in with the pummelo hybrids for now. It doesn't seem to have any value so probably should discard it soon. WPB thinks it may be pure pummelo. 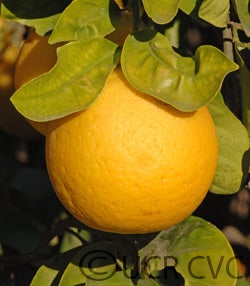