Parents unknown, may be a lemon or citron hybrid. From Wandriker Farms, Poona, Maharashtra State, India.

2/11/2008, RRK: From Ranjit Singh, Indigenous Citrus Germplasm in India: Citrus karna (karna-khatta, id-nimbu, jamuri, khatta nimbu, karna)...the leaves and flowers...similar to rough lemon but larger in size....
From Singh and Chadha, Genetic Resources of Citrus: Karna khatta....recognized to be a type belonging to the sour orange group... Julia F. Morton, Fruits of Warm Climates, p. 131 [http://www.hort.purdue.edu/newcrop/morton/sour_orange.html] : Among other forms of sour orange, there is in India a type called 'Karna', 'Khatta' or 'Id Nimbu', identified as C. aurantium var. khatta (or C. karna Raf.) but suspected of being a hybrid of sour orange and lemon. The fruits are typical sour oranges but the flowers are red-tinted like those of the lemon.

2/11/2008, TW & DK: Round to oblong, looks like a sour orange with a rough rind, and a nipple, said to be a lemon hybrid; thick rind. Thick rind, may be citron hybrid, but relatively tender flesh; low seed count; hyper sour, orange flesh.

Karna is an old Indian fruit of unknown origin, and almost certainly a natural hybrid. While the tree and fruit are distinctive, they exhibit characters of both rough lemon and sour or bitter orange, and there are also characters suggestive of the acid citron. The commercial importance of karna arises solely from the fact that it is extensively employed in India as a rootstock, second only to rough lemon." 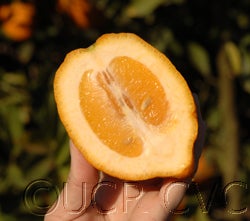 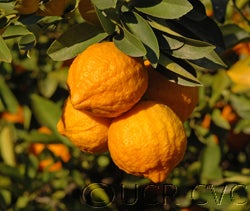 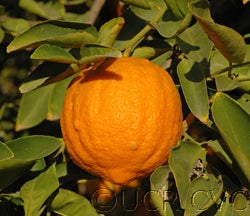 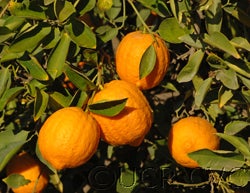 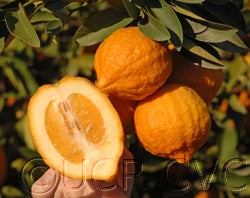