Unknown at this time

1/14/1988, EMN: This accession was heat treated about 1975 for moving out of the tristeza quarantine area to Lindcove. Fruit matches the TCI description OK except that several fruits cut had 12 segments instead of 9.

A thorny tree similar to C. ichangensis but having leaf blades more variable in size and shape and with the tips subacute or even bluntly rounded, not apiculate or subcaudate with blunt points as in C. ichangensis.   The flowers, instead of being borne singly in the axils of the leaves as in C. ichangensis, are sometimes, at least, borne in small axillary racemes with 5-7 flowers.   These latter flowers are much smaller, are 4-merous (instead of 5-merous as is the large single flower of C. ichangensis), and all the parts are smaller.   However, the fruits are borne singly and resemble those of C. ichangensis except for having a thicker peel, of which the inner layer is chalky white just below the outer green layer.   The seeds are also smaller and more numerous than those of C. ichangensis and are arranged 5-7 in each segment.

This species was founded on plants collected in the Khasi Hills of northeastern India, but very similar forms are found in the mountains of northern Burma.   The type specimen in the Kew Herbarium on which Swingle based C. latipes (1913c, p. 12) has a fruit in cross section measuring 5 cm in diameter, peel 5 to 6 mm thick, with nine segments.

In view of the extreme cold-resistance of the typical C. ichangensis (and its hybrid, the so-called Ichang lemon) it would be well worth while to introduce C. latipes into the United States and see if it also is hardy and perhaps of value for use in breeding new hardy acid citrus fruits and hardy rootstocks." 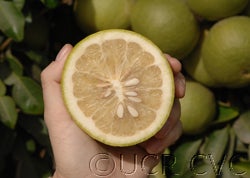 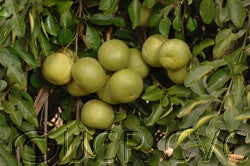 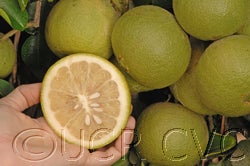