Received as a nucellar seedling from the original Dancy tree CRC 602 which was received from Chico Gardens, Chico, Ca, 1914.

Dancy mandarin traces its origin to a seedling tree growing in the orchard of Colonel G. L. Dancy of Orange Mills in 1867. Its parent was a mandarin tree, known as the Moragne "tangierine," reported to have been growing in the orchard of N. H. Moragne as early as 1843. This tree is believed to have been introduced from Tangiers, Morocco by Major Atway, the previous owner of the Moragne property. Regardless of this variety's tangled history, its reputed origin of Tangiers gave rise to the term "tangerine" which today seems to refer to any mandarin, not just Dancy.

The Dancy tree is a large, vigorous, densely-foliated tree, with a tendency to alternate-bearing. The fruit is usually medium in size and oblate to obovoid in form. The thin, smooth rind is reddish-orange at maturity and easily peeled. The flesh is a deep orange color, with a rich flavor. The fruits usually contain a moderate number of seeds. Dancy fruits mature midseason and do not hold well on the tree although the fruits themselves store quite well after harvest.

L.K. Jackson and S. H. Futch: "Fruit size of Dancy is quite variable, depending upon crop load on the tree. An average size would be 2 1/4 to 2 1/2 inches in diameter. The rind has a deep reddish-orange color at maturity and easily peeled due to the thin, leather peel. These same characteristics make the fruit easy to damage at harvest and the fruit are usually clipped so as to prevent peel tearing or plugging. There are always a few seeds in each fruit ranging from a low of around six to perhaps as many as 20. The fruit shape is somewhat flattened and often somewhat pear-shaped due to the development of a neck at the stem end. The apex of the fruit is usually depressed. The fruit surface is smooth and glossy until almost over mature when it may become bumpy. The variety has a tendency to be alternate bearing. Crop thinning by judicious pruning is advised in these situations. Dancy produces a rather large tree at maturity and tends to be vigorous with an upright growth habit. The tree is nearly thornless with thick foliage. The tree is moderately cold-hardy, but the thin-skinned fruit are not. Dancy is self-fruitful and therefore requires no other pollenizer trees nearby to enhance productivity.

Tree vigorous and large (for the mandarins), upright-spreading in habit; nearly thornless; foliage moderately dense and of the mandarin type, but venation not so pronounced as in satsuma.  Productive but with some alternate-bearing tendency.  Tree moderately cold-resistant but not the fruit.

Tanaka (1954) has placed Dancy in his species tangerina, winch he suggests originated in India and was early taken to southern China, where it is still extensively grown.  He considers it to be similar to if not identical with the Obenimikan of Japan, which was introduced from China several centuries ago.  He believes that it is closely related to the Ladu and Keonla mandarins of India, a view with which the writer is in accord.

The history of Dancy's introduction into the United States (Florida), where it is currently the most important mandarin variety, is somewhat obscure.  According to Ziegler and Wolfe (1961) the original tree was a seedling in the grove of G. L. Dancy at Orange Mills, Florida, which was planted in 1867.  The parent tree was known as the Moragne "tangierine" and was said to have been introduced from Tangiers (Morocco) and planted at Palatka by a Major Atway, whose place was acquired by N. H. Moragne in 1843.  The first mention of the Dancy variety is in the 1877 report of the Pomological Committee of the Florida Fruit Growers Association, in which it was said to be similar but slightly superior to the Moragne tangerine.  Although introduced to the industry as early as 1872, its commercial propagation was begun about 1890 by the Rolleston Nursery at San Mateo.  Within a few years, Dancy became the leading mandarin variety, a position it has maintained ever since.

The high total heat and humidity of the Florida climate combine to provide an adaptation for this attractive and popular fruit that is unequalled elsewhere in the United States and is approached only in limited areas in other parts of the world.  This serves to explain why its commercial importance is restricted primarily to Florida.  Except for the hottest interior districts, where sunburn of exposed fruits is a hazard, fruit size is disappointingly small.  In arid or cooler climates and on most rootstocks, the flavor is too acid for the average palate.  Thus, in California and Arizona, fruit of acceptable size and quality is produced only in the low-elevation, desert regions.

The importance of the Dancy variety is reflected by the fact that on several occasions in recent years the Florida crop has approximated 5.5 million 70-lb box equivalents.  Dancy production in California and Arizona in 1965 was about 250,000 boxes.  Although long since introduced into other parts of the citricultural world, for the reasons set forth above, this variety has failed to compete successfully with other, better adapted varieties.

In recent years approximately 70 per cent of the Florida Dancy crop has been shipped fresh, the balance being processed for the juice—both single-strength canned and frozen concentrate.

Of special interest is the fact that this variety has contributed to the parentage of the principal tangelos (Minneola, Orlando, Sampson, and Seminole), the Frua and Fortune mandarins, and the Dweet and Mency tangors.

Frost Dancy, a nucellar selection that originated in 1916 from a cross made by H. B. Frost at the Citrus Research Center, Riverside, California, is currently the clone most propagated in the southwestern United States.  It was introduced commercially in 1952.  The Trimble and Weshart, which came from a Dancy tangerine-Parson Brown orange cross in the early breeding work of Webber and Swingle (1905), are now regarded as nucellar seedlings of Dancy rather than new varieties.  Neither seedling achieved commercial importance." 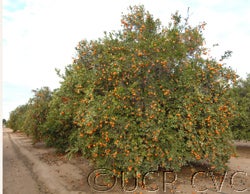 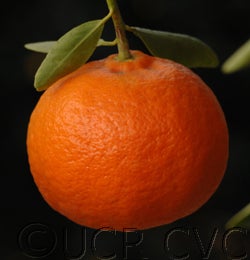 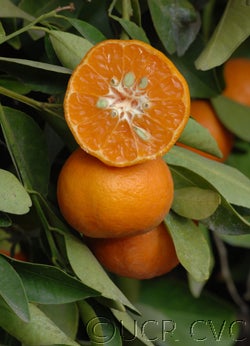 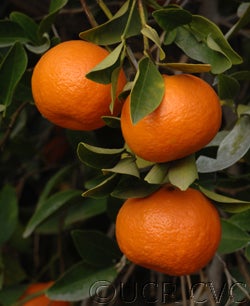 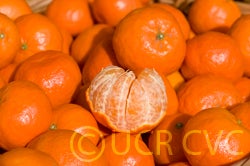