Seeds obtained from tree 50 years old in Claremont. This tree is believed to be one of the original Eureka trees. This source looks and behaves more like a Lisbon, WPB 1/1975.

Lisbon lemon is one of the most widely-grown lemons in California and is planted extensively throughout the citrus-growing regions of the world. It is believed to be a Gallego seedling selection of Portuguese origin. Lisbon lemon trees grow vigorously into large, thorny, upright but spreading trees. Due to their vigorous growth habit, the fruit is usually found within the canopy of the trees. The new leaves and flowers are tinged with purple. Lisbon trees produce several crops per year, but the main crop is winter and early spring. The fruits are medium in size, oblong, with a prominent nipple. The rind is slightly textured and yellow at full maturity. The flesh is pale greenish-yellow, low-seeded, and very acidic. There are many named selections of Lisbon lemon, with individual characteristics that distinguish them from the original clone.

No longer commercially available in California. This accession no longer has an approved bud source. Please refer to the CCPP for information on another approved budsource or to start a reintroduction inquiry. 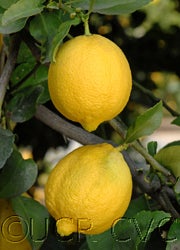