Rusk citrange was developed as a result of some of the earliest organized hybridization work performed in response to a period of catastrophic cold temperatures that occurred in Florida in 1894. The crosses were made by W.T. Swingle and H.J. Webber of the United States Department of Agriculture (USDA).

" —The Rusk citrange originated as a hybrid between the common orange (used as the female parent) and trifoliate orange (used as the male parent). The trees are far more hardy than the common orange, and produce a fruit intermediate in qualities between the two parents. This being the first hardy orange or citrange produced, and belonging to an entirely new group of citrus fruits which will doubtless become of very great importance in many parts of the world and be improved in a marked degree, has been named the Rusk in honor of the first Secretary of Agriculture, Hon. J. M. Rusk, under whose administration the first work on citrus fruits in Florida was undertaken by the Department of Agriculture. The Rusk citrange was one of three seedlings grown from a single hybrid fruit which developed in the grove of Col. G. H. Norton, at Eustis, Fla., in 1897.

Two of the seedlings, from which several budded trees have been grown, resemble the ordinary sweet orange in foliage and general character, and are apparently false hybrids from seeds of adventive, polyembryonic embryos, which, as explained above, are developed from certain cells of the mother tissue without the intervention of the male element. These two seedlings have unifoliolate leaves, and are evergreen like the common orange, and while they have not yet fruited, owing to the fact that they have been several times frozen back, it is not expected that they will produce anything of value, nor, judging from a test already made, will they produce hardier types. The other seedling. No. 716, was a strictly intermediate type, having trifoliate leaves similar to the male parent, though rather larger. Even the first leaves of the young seedling exhibited this character, and a photograph of a seedling but slightly over 1 inch high published by the writers at that time plainly shows this trifoliolate character. No. 716 was furthermore much larger and more vigorous than the other two seedlings, showing an increase in vigor, which is such a marked character of hybrids in general. Trees were budded with these hybrids in the spring of 1899, in the nursery of Mr. G. L. Taber, at Glen St. Mary, Fla. The first fruits were received in September, 1902, one tree that season bearing about a dozen fruits. In the fall of 1903 the same tree produced about a bushel of fruits, and several other trees, budded on trifoliate-orange stock, gave about a half-dozen fruits each. A similar number was also produced in 1904. There have thus been produced sufficient fruits to afford a fairly thorough test of this hybrid."

"From Glen St. Mary, Fla. Propagated by Mr. G. L. Taber, for distribution by the Office of Seed and Plant Introduction and Distribution. Received December 16, 1904. Hybrid citrus fruits developed by Dr. H. J. Webber, in charge of the Department Plant Breeding Laboratory. Of these hybrids two are called hardy and two are tender.....The hardy varieties constitute a new group designated by Doctor Webber as citranges. They are the Rusk and the Willits..... Doctor Webber describes the varieties as follows: 13002. The Rusk citrange (P. B. No. 716) is a hybrid between the common sweet orange (female parent) and the trifoliate orange (male parent). The tree resembles that of the trifoliate orange in character, having trifoliate leaves which are much larger than those of the ordinary trifoliate. It is very productive and bears a small fruit about 2 to 2 1\2 inches in diameter, which is somewhat similar to the tangerine. The fruit is nearly seedless, having only one seed to two fruits, and is very juicy, yielding a much larger quantity of juice than the best lemons of the same size. It makes a very pleasant citrangeade, and can be used for making pies, marmalades, jellies, and for other culinary purposes. Eaten with sugar, it is a very desirable breakfast fruit."

Rusk, a Ruby orange and trifoliata hybrid, is one of the oldest citranges, having been created by Swingle in 1897 and described and released in 1905 (Webber and Swingle).  It was named in honor of J. M. Rusk, the first Secretary of Agriculture of the United States.

The tree is an attractive ornamental and the fruit is juicy and approaches edibility more closely than most citranges.  Its low seed content mitigates against use as a rootstock.

Rusk is currently of greatest interest and importance in Florida.  " 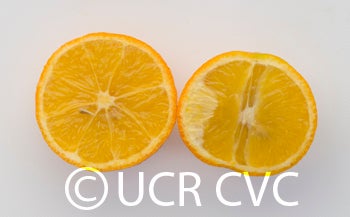 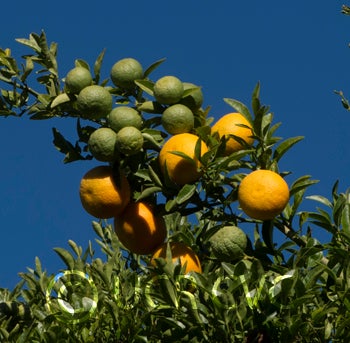 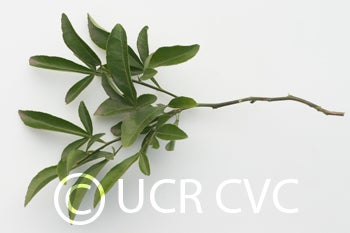