Possibly a hybrid between a citron and a lemon.

Ponderosa lemon is a large fruit with a thick and bumpy rind.  Since both the tree and the fruit resemble citron in most respects, there is little doubt that Ponderosa is a hybrid between citron and lemon.  This variety originated about 1887 as seedling grown by George Bowman of Hagerstown, Maryland, and was named and introduced into the nursery trade in 1900.  Ponderosa makes a nice ornamental with its purple-tinged flowers and new growth, however it is sensitive to cold and very thorny.

Both fruit and plant are clearly citron in most respects, and there can be little doubt that Ponderosa is a hybrid between citron and lemon.  According to Webber (1943), this variety originated about 1887 as a chance seedling (presumably of lemon) grown by George Bowman of Hagerstown, Maryland, and was named and introduced to the nursery trade in 1900.  If this account is accurate, the fruit from which the seed was obtained must have been of Italian origin.

Ponderosa is of importance primarily as an oddity and ornamental, although the fruit can be used as a lemon substitute.  It is used somewhat as a tubbed plant in patios but most commonly as a dooryard ornamental in California and Florida. " 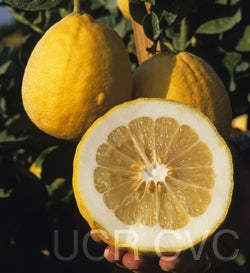 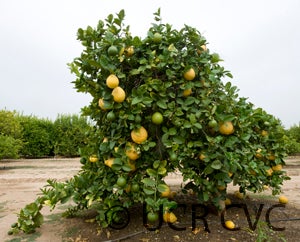