Received as seed from Texas at an unknown date.

Said to have originated as a limb sport of Thompson that was found in 1929 by A.E. Henninger of McAllen, Texas, and patented by him in 1934. This is the first citrus variety to receive a patent.

1986, EMN: Grown from seed from Texas. Each tree propagated from seedlings which bore respective number of that sdlg. Typical trees were selected and propagated. This was CRC 2850-D. All other seedling lines are long gone so "D" is obsolete.

"Fruit similar to Thompson in all respects except for much deeper pigmentation in the flesh (but not in the juice), crimson blush on the rind, especially at points of contact between fruit; albedo pigmented.  Holds on tree as well as Marsh or Thompson but with some fading of flesh color.  Similar to Thompson in season of maturity.

Tree indistinguishable from Thompson or Marsh.

While the name Ruby has a slight time priority, Redblush seems preferable to avoid confusion with the much older Ruby orange variety.  Moreover, Redblush is more descriptive of this variety and is the name most used in the region of its origin.

Ruby (Henninger Ruby Red) originated as a limb sport of Thompson that was found in 1929 by A. E. Henninger of McAllen, Texas, and patented by him in 1934.  So far as is known this was the first citrus variety to receive a patent (U.S. Plant Patent No. 53).

Redblush (Webb Redblush) is said to have originated as a limb sport, also of Thompson, that was observed in 1931 by J. B. Webb of Donna, Texas, propagated soon thereafter, and introduced in 1934.

Ruby and Redblush are so similar as to be indistinguishable and for all practical purposes they may be considered to be identical.  A number of similar bud mutations are known to have occurred subsequent to the two now generally propagated as Redblush or Ruby.  Thus, Waibel (1953) lists seven bud mutations which tests by the Texas Agricultural Experiment Station have shown do not differ significantly in appearance, season, or yield.  Ziegler and Wolfe (1961) state that several mutations have occurred in Florida that cannot be distinguished from Ruby.

Nucellar clonal budlines are currently of great interest and are being planted commercially, in Texas, Arizona, and the Coachella Valley of California.  The oldest and most popular of these is CES Redblush No. 3, which was produced at the University of California Citrus Research Center, Riverside.

Because of the attractive appearance provided by the pigmentation of the rind and its deeper flesh coloration, Redblush (Ruby) rapidly superseded Thompson and some years ago became by far the leading pigmented variety and one of the major grapefruit varieties. 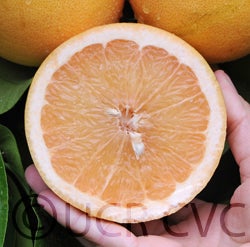 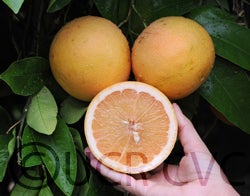 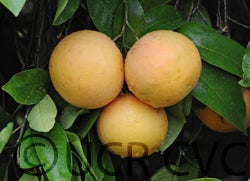