Fifteen seeds each from four fruits grown in Jamaica, purchased in N.Y. and forwarded to H.J. Webber, 1/42, by Mr. Kendal Morton of N.Y. City. Seeds were taken from these fruits and planted about 2/10/42 and gave 13 seedlings. Buds from each of these seedlings will be inserted into stocks in spring of 1943 and grown to fruiting in the hope of reproducing the variety- two trees of each seedling, if possible. Each seedling will be grown under the CRC number 2780, but kept separate by letters a,b,c, etc. Two buds were taken from each seedling and budded to Koethen sweet orange. There was not any apparent difference in this seedling when propagated in 1950--WPB. Only one budline available now- presumedly the one most resembling true Ugli. This budline was infected with exocortis which was removed by shoot tip grafting (STG 142-1)--EMN 1986. Since Ugli seed is monoembryonic, this accession is not true Ugli. Ugli is described in TCI, Vol. I, pp 530. 1/20/89- Fruit examined- matches Ugli description quite well for a gametic seedling budline. Too tart now to eat.--EMN. 4/18/89- Fruit all on ground now.--EMN

According to Webber (1943), the rather unusual name for this natural tangelo is said to have been given to this unattractive but delicious fruit in the Canadian market which first received it.  It was referred to as the "Ugly" citrus fruit.  Soon thereafter, the name Ugli became the copyrighted trademark of G. G. R. Sharp, the principal and for some time the only Jamaican exporter.

From the information he was able to obtain, Webber (1943) concluded that Ugli originated as a chance seedling of unknown parentage near Brown's Town, Jamaica.  It came to notice in 1914 and was propagated by F. G. Sharp at Trout Hall and first exported about 1934 by his son, G. G. R. Sharp.  It is obviously a hybrid with characters that suggest mandarin and grapefruit parentage, hence Webber provisionally classed it with the tangelos.  Partly because of the monoembryony exhibited by the seeds, it is the opinion of the writer that pummelo is the parent in question rather than grapefruit.

While the fruit is unattractive, its shipping and eating quality have given it a high reputation in Canadian and English markets and its production is increasing in Jamaica." 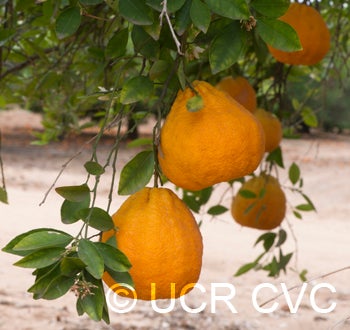 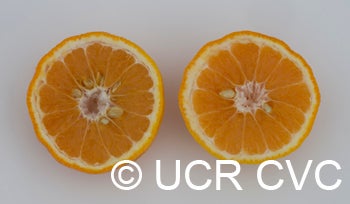 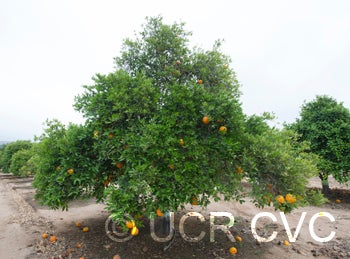