WPB, 1951: This tree was pulled by mistake in 1950. Fortunately seedlings of it were growing in the nursery. Propagations from several of these seedlings will be se out in 1951.

EMN, 1986: A small fruited mandarin called C. oleocarpa or timkat (in southern China) is described in TCI, Vol. I, pp 525. This accession may or may not be the same cultivar. Probably not, in my opinion; but what do I know? Only what Dr. Bitters tells me, and he won't tell me much..

There are some gaps in the history of this accession. Apparently it originally came to the US as budwood in 1919 and remained in USDA control until at least 1935, when it was PI'ed. It arrived at Riverside in the mid-1930's (1938 being estimated from accessions with similar CRC numbers), but in what form is not specified (archival sources note "budwood?"). Apparently a tree was planted but pulled by accident in 1950. A budded tree was planted in 1951, apparently from a seedling budsource. From that point, the history is better documented. (RR Krueger, 2017-12-21)

"Citrus oleocarpa Hort. ex Tan.—This species is the timkat of southern China and yuhikitsu of Japan.  The fruit is small, yellowish-orange, and somewhat oblate.  The base usually has a short radially furrowed neck and the apex is depressed.  The rind is medium-thin, relatively tight but readily peelable, and strongly aromatic.  Flesh color is deeper than that of the rind, the texture is crisp, and the flavor is rich but subacid.  The seeds have light green cotyledons.

This species is of Chinese origin and is said to have importance on the Chinese mainland, on Hong Kong Island, and on Taiwan." 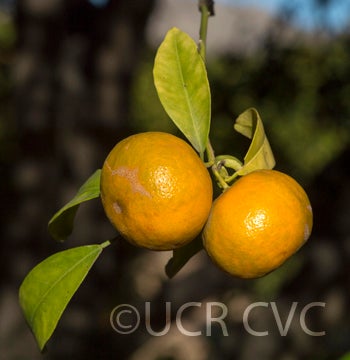 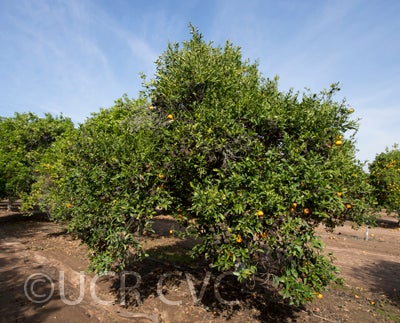 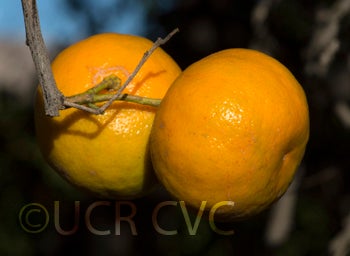