It is said to have come originally from Cuba. It was grown commercially for several decades but has not been planted for many years.

3/18/1988, EMN: This appears to be very similar (and maybe identical to) CRC 297, Triumph; and CRC 596, Imperial grapefruit. These three are somewhat different from common seedly white grapefruit in that they have a somewhat darker yellow rind color on average, seem to have slightly thicker rind, flesh is slightly darker yellow and slightly coarser, and flavor is sweeter, lacking the typical grapefruit flavor and bitterness. The C.I. speculates that these could be a possible grapefruit-orange hybrid (orangelo). They are more grapefruit-like than orange-like and probably should continue to be carried as grapefruit.

"This Florida variety has a relatively small, nearly round, orange-yellow, seedy fruit of sweet flavor that lacks the typical grapefruit bitterness and aroma and is suggestive of sweet orange.  While a distinctive variety, Royal has resemblances, notably in flavor and other respects, to such varieties as Triumph, Imperial, Mott and Leonardy, which suggests that they comprise a natural group and may possibly be grapefruit-orange hybrids (orangelos).

Royal is said to have come originally from Cuba but was named and introduced in 1892 by the Royal Palm Nurseries of Oneco, Florida.  It was grown commercially for several decades but has not been planted for many years." 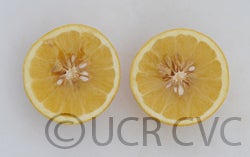 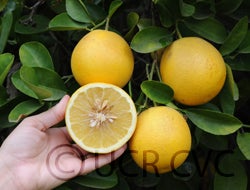 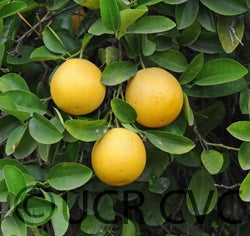