“Kaffir” means infidel in Arabic, from “kafara”. G. C. Whitworth’s Anglo-Indian Dictionary (1885) states that not only was the term applied by Muslims to unbelievers, but “in Western India the word is a common term of abuse.” When Arab slavers first came to the east coast of Africa they applied the word to the inhabitants, and it is best known today as a derogatory term used by South African whites for blacks. According to A Dictionary of South African English (Oxford, 1991) this “term of contempt” is “now an actionable insult.” Indian Muslims most likely encountered the fruit as an import from lands such as Thailand and Sri Lanka, where Buddhists and other non-Muslims predominated. From this Indian usage, intended to convey otherness and exotic provenance, the term passed into English.

Received as a live plant from the Office of Crop Physiology and Breeding Investigations
Washington, District of Columbia, 1930.

Citrus hystrix is used primarily for its leaves and so it can be considered year-round. When the fruit reaches full maturity in late winter to early spring, the rind turns yellow and the fruit falls from the tree.

WPB: This is true hystrix.

OJB: The tree is small and shrubby with distinctive leaves that have a petiole almost as large and wide as the leaf blade.  It is these pungent leaves and not the fruit of this species that is commonly used in Thai and Indonesian cooking.  The fruit is small, oval to short pyriform, and has an irregularly bumpy rind. In some places the fruit is used to make a shampoo that is insect repelling.

Ochse stated that "this species, called Djerook pooroot in the Dutch East Indies, is nowhere cultivated on a large scale but…very often on a small one."

This much misunderstood species was named by De Candolle from young seedlings, not yet in flower, grown from seed sent to the Montpellier Botanic Garden from Mauritius, where it was probably not native.   De Candolle redescribed it in 1824 but had not yet seen flowers or fruits.

Thanks to flowering material from Mauritius and from Montpellier preserved in the Kew Herbarium, it is possible to determine with certainty that C. hystrix is the species with very bumpy fruits belonging to the subgenus Papeda that is widely distributed in Indonesia.   The fruits usually have 10 to 12 segments (rarely 13 or 14).   The leaves are blunt-pointed, usually of medium size, 8 to 12 by 3 to 5 cm, more or less irregular at the tip and sometimes slightly emarginate.   The margins are more or less crenate.   The winged petiole, usually two-thirds to three-fourths as long as the leaf blade, is broadly rounded and blunt at the base, often subtruncate at the tip, often with more or less crenate margins.

The flowers are small, with short, entirely free stamens, as in all the other species in the section Papeda.   The fruits are almost always bumpy or tuberculate.   The pulp-vesicles were first described by Penzig (1887, pp. 131-32), who stated: "They are provided with a slender very long stalk which suddenly enlarges toward the free end, forming a small round or oval body pointed at the tip."   Penzig noted that they differ from the pulp-vesicles of the other species studied by him in showing "a large amount of oil accumulated in their centers."   This accumulation of numerous droplets of oil, often of a very strong and acrid flavor, is characteristic of all the species of the subgenus Papeda.   The cotyledons are epigeous in germination.

Citrus hystrix, although the best known and most widely distributed species of this subgenus, is not the most vigorous species, and not the most promising for use as a rootstock.   It has undoubtedly hybridized with other species of the subgenus Papeda in the village fruit gardens of the people of the East Indian Archipelago and also with species of the subgenus Citrus.   Doubtless some of these hybrids are included among the bizarre forms described and figured by Wester (1913 and 1915).

Bonavia reported (1886, p. 215) that the fruit of C. hystrix is never eaten; however, it is used by the natives in Ceylon as an insecticide for washing the head and also for smearing on the feet to kill land leeches.   The tree is often cultivated near the villages for these purposes.   According to Bonavia, C. hystrix may have come into Ceylon with the Dutch and their Malay servants for use as a hair wash.   This use may account for the wide distribution of the species throughout the East Indian Archipelago and adjoining parts of the Asiatic mainland.

"The Cultivated Oranges, Lemons Etc. Of India And Ceylon with researches into their origin and the derivation of their names, and other useful information", E. Bonavia, published in London in 1888 by W.H. Allen & Co, pages 81-82. Plate 225(CCXXV)

"Classification of Citrus Fruits of Assam", S.C. Bhattacharya and S. Dutta, published in India in 1956 by The Government of India Press, pages 87-88. 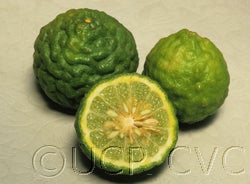 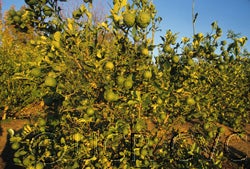 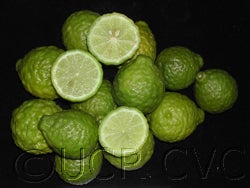 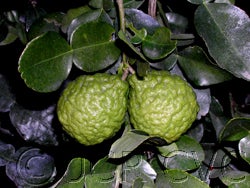 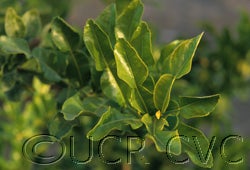