"Originally received as seed...received 08/11/1925 (at USDA-PIO)" (information from original PI record). Accession was collected in 1925, Java, Indonesia. Received as a cutting at Riverside in 1987.

Especially selected pink-fleshed shaddock. Plants growing at the United States Plant Introduction Garden...originally grown by the Office of Crop Physiology and Breeding...numbered in January 1935 for convenience in distributions. (information from original PI record)

Bitters/Brusca comments: Light crop. Smooth fruit. Obovatae with thick peel, green flesh. Moderate seed. Good taste. Not mature. A trace of pink in fruit from S1D-24-11, not in fruit from 24-12. (3/10/54, University of California archival material on file at NCGRCD/CVC)

Most fruit on ground. Flesh greenish-yellow with definite pink tinge; indicates this budline was derived from S1D-24-11 (see above). Rind is only medium,-sthick; flavor good, tart. (EM Nauer, 1/13/1988)

Note: This accession was previously associated with another PI (539359) that was mistakenly assigned, apparently without knowledge of this correct PI of 109702 (probably because PI was assigned after this was received at CES with only a CPB number). Note: Observation data was generated as PI 539359 and also appears in that record. (RRK, 02/2008)

This clone, which was received by the Citrus Experiment Station, Riverside, from the U.S. Department of Agriculture in 1929 under the name Siamese Pink (CES 2246) corresponds ell with the variety Siam, named and described by Wester (1917).  According to Wester, it was introduced into the Philippine Islands in 1913.  In California, when fully ripe it is clearly one of the best in flavor, although sometimes it has a trace of bitterness." 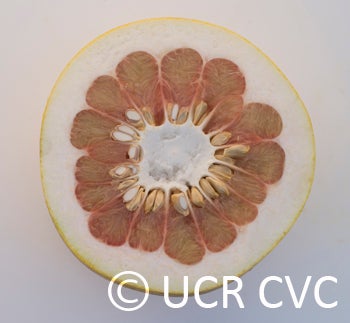 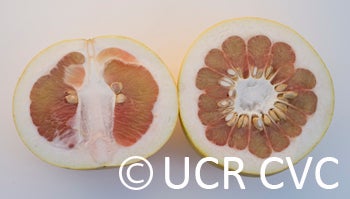 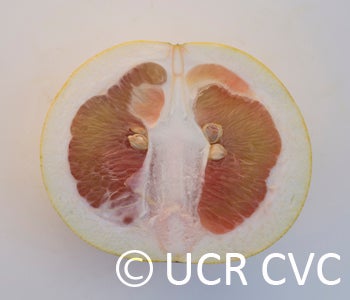