This accession had a strange and tragic history. It was received by USDA as an un-named, white fleshed pummelo from Java. As of 1954, it was still a white-fleshed pummelo. At some point, someone decided it was 'Kao Pan' but I cannot find documentation of who or when. In 1954, from the documentation available, it appears that the original trees planted in 12S, Row 26 were the only one available for observation. The trees planted at 12D-35-1,2 in 1983 were propagated from the VI 161 tree at LCFS. It therefore appears (but is not certain), that an incorrect, pink-fleshed pummelo was collected either for the VI in 1962 or from LCFS for the propagation of the 12A trees. When 12A-35-1 was removed in 2011, 2 trees were propagated from an incorrectly documented, protected tree (of which I also cannot find the original receipt documentation) that is actually PI 109715. Therefore, when 12A-35-2 was removed in 2011, the putative PI 109691 was lost. However, in truth it had been lost much earlier, whenever the pink-fleshed one was propagated. Several things are apparent: (1) the pink-fleshed pummelo was not consistent with either the original fruit or descriptions of 'Kao Pan' (see Reinking and Gross, 1921; Groff, 1927); (2) the CV name 'Kao Pan' may have been assigned erroneously either purposefully or not; (3) the pink-fleshed pummelo mistakenly associated with PI 109691 is probably another pink-fleshed pummelo that was or is in the collection; (4) there are at least 8 other 'Kao Pan' to deal with; (5) CPB 10127 is not associated with 'Kao Pan' in Groff (1927). In any event, PI 109691 is inactivated. Note: to further compound this commedia degli errori, PI 539365 was erroneously assigned to this genotype in the early 1990's. Observations were made when it was numbered PI 539356, as were distirbutions prior to today. (RR Krueger, 2014-05-15)

To even further complicate matters, in 1945 extensive hybridization involving pummelos is performed by Frost and Leslie. PI 109690/CPB 10126/CRC 2240 is hybridized with pollen parent PI 109691/CPB 10127/CRC 2241. Years later this hybrid is said to have produced the cultivar known as ‘Chandler’. The article describing the new hybrid “Chandler—A hybrid pummelo”, from January 1961, says PI 109691/CPB 10127/CRC 2241 was one of several introductions that have carried the name “Kao Pan” and that “it shows slight interior pink coloration, varying from year to year.” In 1954 this accession used as a pollen parent was described as having white flesh, however by the time the parents of 'Chandler' are described for the article, the accession is described as having pink flesh.

Description from George Weidman Groff's "Culture and Varieties of Siamese Pummelos as Related to Introductions into other Countries" (December, 1927)

"Kao Panne (which means "white flat") fruits are subglose, flattened, pistil-end depressed, and are without a neck. The rind  is light  to lemon yellow, smooth, and 1-2 centimeters thick. They have 12-15 segments, separating with difficulty. Flesh is light yellow. Each juice vesicle can be separated. They have a sweet, very mildly acid flavor, and there is slight to no bitterness." 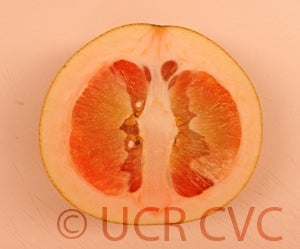 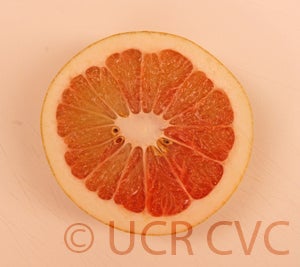 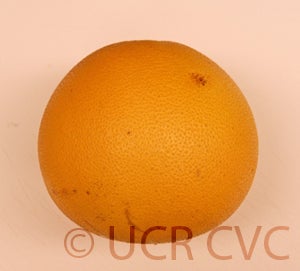