Originated as a limb sport in a Marsh tree in an orchard owned by W.B. Thompson at Oneco, Florida, 1913.

"Fruit medium in size, oblate to spherical; areole indistinct or lacking; seeds few or none.  Pale to light yellow at maturity.  Rind medium-thin, tough, and surface very smooth.  Primary flesh color chamois to dark buff, but under favorable conditions light pink (but not in juice); albedo not pigmented; flesh texture tender and juicy; flavor good, similar to Marsh.  Holds on tree unusually well, but with considerable fading of color; ships and stores well. Midseason in maturity, (earlier than Marsh).

This variety originated as a limb sport in a Marsh tree in an orchard owned by W. B. Thompson at Oneco, Florida.  While discovered by S. A. Collins in 1913, it did not become available until 1924 when it was named and introduced by the Royal Palms Nurseries, also of Oneco.

Because of its seedlessness, Thompson immediately attracted attention and was extensively planted in Texas and to some extent in Florida, quickly replacing the still new Foster variety.  In turn, it has long since been superseded by the more deeply pigmented Redblush variety, which also is more attractive because of the rind coloration it exhibits.

Thompson remains of horticultural interest, however, because it was the first seedless pigmented variety to be discovered and within a few years gave rise by bud mutation to a number of more deeply pigmented clones.  Among these are Redblush, the variety that replaced it and has become by far the most important pigmented grapefruit variety, and the more recent Burgundy.  In addition, nucellar seedlings of Thompson do not exhibit the pigmentation of the parent clone.

Several other pink-fleshed seedless limb sports of Marsh have been reported.  Shamel (1920) has described one which was found at Corona, California, and more recently Waibel (1953) has mentioned two which occurred in Texas.  All markedly resemble Thompson. 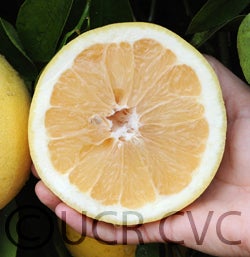 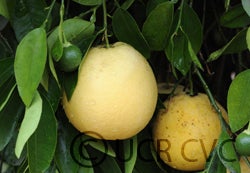