1985, EMN: This accession is chronologically out of order because it was not given a CRC number until about 1927. Corsican citron is said to be the same as the Citron of Commerce.

12/22/1987, EMN: This appears to be true a Corsican citron or close to it. Fruit matches The Citrus Industry description quite well, and it is sweet like it is supposed to be.

12/5/2006, DK & TS: Blocky, oval shape is typical, though some have acorn shape. Thick, firm rind is sweet, but has some bitterness; flesh is seedy, acidless.

Tree small, open and spreading; medium-thorny with some large, stout spines (very much like Diamante); buds, flowers and new growth not purpie-tinted.

This variety is said to be the best and most important citron in Corsica and presumably originated there, although its history is unknown.  It was introduced into the United States about 1891 and distributed under the name Corsican." 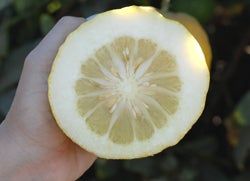 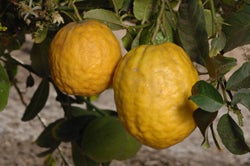