Mexican lime is known by many names such as Key lime, Bartender’s lime, and West Indian lime. The trees are moderately-sized and bushy, almost shrub-like, and the leaves are distinctively aromatic when crushed.  Some selections are quite thorny, while other selections are thornless. Mexican lime trees are sensitive to cold. The blossoms are pure white and fragrant. The fruits are small, approximately one and one-half inches in diameter, and almost round, with a thin, smooth, greenish-yellow rind at maturity that is especially fragrant. The flesh is greenish-yellow, seedy, and highly acidic, with a fine texture.  Once Mexican limes reach full maturity, usually in autumn to early winter, they drop from the tree.

The West Indian or Mexican lime is the kaghzi nimbu (numerous modifications and other local names) of India, the limûn baladi of Egypt, the doc of Morocco, the Gallego lime of Brazil, and limon corriente in some Latin American counties.  In North America, it is sometimes also called the Key lime.

Because of the relatively high degree of polyembryony exhibited by this fruit, it comes remarkably true to seed, and seed propagation is still employed in most of the countries where its culture is important—India, Egypt, and Mexico.  As a consequence, clonal varieties have not been selected and named, except for a few which are noted below.  In this connection, it is significant to note that in California it has been found impossible to distinguish between seedling clones of the common acid lime from India, Egypt, and Mexico, and clones of Florida and West Indian from origin budded trees.  It seems likely, therefore, that the principal clones employed are genetically identical and that only one horticultural variety is involved, which in California is known as Mexican and in Florida as West Indian or Key.

A nucellar seedling selection arising from the Mexican lime-grapefruit cross was described and named Everglade in 1905 by Webber (1943) in the belief that it produced a larger fruit.  In California, it has been indistinguishable from the parent clones and therefore has not come into use.  Thornless clones reported in the literature include: Doc Sans Epines (Doc Thornless) of Morocco; Yung, a form introduced into California from Morroco by George Yung about 1882 and described and named by Webber (1943); an introduction from Trinidad (West Indies) received by the United States Department of Agriculture in 1910, a limb sport which was found in the Ballard orchard near Weslaco, Texas, shortly after the freeze of 1925; and a selection recently made at Yuma, Arizona, by J. Hamilton of the U.S. Department of Agriculture.  None has proved to have commercial value.

Because they produce distinctive symptoms when infested with the tristeza virus, West Indian lime seedlings are widely used as an indicator in the detection of this disease." 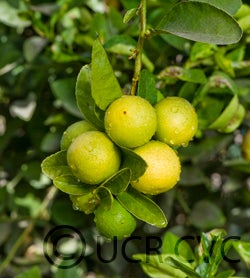 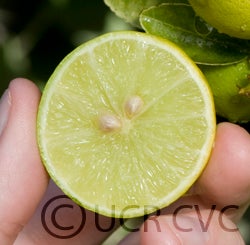 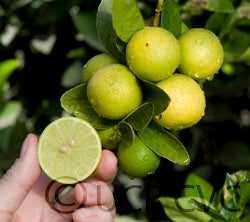