Reported to be a hybrid of Microcitrus australis × M. australasica.

"Twigs very slender and very numerous, usually only lightly angled, very minutely and rather sparsely puberulous; bud scales brownish, inconspicuously ciliate; nodes 5-13 mm long, with a single slender, sharp, axillary spine, 4-12 mm long; leaves on vigorous leading twigs 20-30 X 8-13 mm, glabrous, narrowly elliptical or lozenge-shaped, with undulate or irregular, shallowly crenate-dentate margins, narrowed at the apex, sometimes with an emarginate tip, cuneate at the base, with numerous lateral veins arising at a small angle (25°-35°) with the midrib, with some cross and some subparallel veinlets, narrowed into very short petioles, 2-3 mm long which are sparingly and finely pubescent above; leaves on lateral twigs 10-20 X 3-8 mm, linear-elliptic or narrowly lozenge-shaped, the smaller leaves entire, the larger with undulate or irregular, shallowly dentate margins, petioles 1.2-2 mm long; fruits elongate-obovoid or ellipsoid, 35-50 X 20-28 mm, with the tip abruptly rounded, numerous slightly protuberant oil glands, circular in outline and about 0.5 mm diam., peel 2 mm thick, yellowish-green when ripe (near lime green, Ridgway, pl. 31); inner portion 0.4-0.5 mm thick, smooth, of firmer texture than the outer, segments 5-8 central core solid, very narrow, ovule traces numerous; pulp-vesicles ovoid, tapering to an acute point above, broadly rounded at base, 4.5-7 X 2-4 mm, borne on slender stalks, 2-7 mm long, attached to inner wall of the ovary but not to segment walls, not adhering to one another, containing an acid juice; seeds none.   The ripe fruits have a spicy, not disagreeable odor.   The flower buds are spinel red, and the new growth is very dark dull dusky purple (Ridgway, 1912).

This remarkable hybrid was grown from seeds of the Australian round lime, Microcitrus australis, or of the finger-lime, M. australasica, sent to the U.S. Department of Agriculture's Agricultural Research Service by the late J. E. Maiden, director of the Botanical Garden at Sydney, Australia.   More than 200 meters of twigs, both large and small, were borne on a single branch, 3 cm in diameter, of a Sydney hybrid growing near Riverside, California, which survived for several decades on land no longer irrigated where citrus trees made little or no growth.

The leaves are intermediate in shape between the two parent species, but, owing to the enormous number of twigs and consequent great profusion of leaves, they are not intermediate in size between those of the parent species, but nearer that of the small-leaved parent, the finger-lime.   The leaf margins are more crenate than those of either parent.   The small twigs of both parents are minutely ciliate, but the larger angled twigs, especially of the finger-lime, are almost glabrous.   In the hybrid, however, the twigs are more pubescent than those of either parent and are more slender and more upright.

This hybrid has been found to support the orange and other commonly grown citrus fruits very well in greenhouse culture, and it can be propagated readily from soft-wood cuttings of summer growth.   As it excels all known citrus fruit trees in the length of twigs it produces, it should be tested as a stock for citrus fruits grown on foothill soils low in organic nitrogen.   On account of its extremely abundant branchlets covered with miniature leaves, the Sydney hybrid deserves trial as an ornamental, especially in the orange-growing section of the southeastern states." 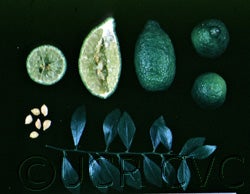