Nagami kumquat, Fortunella margarita, is the most commonly grown type of kumquat. Kumquats are acid fruits that are popular in Asian countries, especially China. The tree is small to medium in size with a dense and somewhat fine texture.  The trees are remarkably cold-hardy due to their tendency to become semi-dormant from late fall to early spring. Kumquat trees are especially susceptible to zinc deficiency, which can cause small leaves and reduced internode distance.  The flowering season for kumquats is summer and the fruits mature in late winter, holding well on the tree. The typical Nagami fruit is oval in shape, one and one-quarter inch long and three-quarters of an inch wide. The entire fruit is eaten; the orange rind is sweet and the light orange flesh is acidic.  Each fruit contains about five or six seeds.

1/21/1929, RGL: Five trifoliata seedlings were budded to this kumquat in the Riverside nursery. These trees are probably Nagami; there was a mix-up in the nursery.

"This species is the Naga or Nagami kinkan of Japan.  According to Swingle, the most distinctive features of this species are the oblong, obovate, or oval form of the fruit, the narrow range in number of segments (normally four or five), the deep color and pronounced flavor of both fruit and rind, and the comparatively large leaf and tree.

As previously indicated, this is the form which first reached the Occident.  It is vigorous and prolific and the fruit is deeply colored, pleasantly flavored, and of good size, though the rind oil is somewhat more pronounced than in other kumquats.  It is much the most popular variety both in the Orient and the United States." 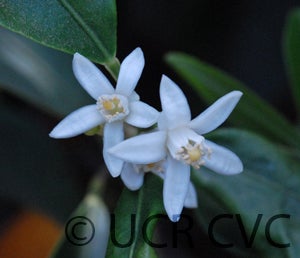 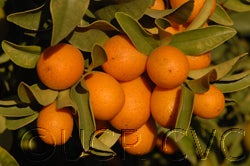