Yuzu is thought to be a hybrid between Ichang papeda and Satsuma mandarin. This accession is from Hubei Province, China, along the Yangtze River, where it was found in a field on a slope at an elevation of about 4,000 feet.

Yuzu is used for cooking primarily when it is still green which occurs during September to October.

11/2009, TJS: "Yuzu is the most popular of the acid citrus used in food preparation in East Asia. Tanaka wrote that it was thought to have originated in Korea and from there was introduced into China, and eventually made its way into southern Japan during the Tang Dynasty approximately 1,000 years ago (Taninaka, 1981). Other scientists maintain that the center of origin of Yuzu is in the upper reaches of the Yangtze river, in China (Rahman et al., 2001). The fruit is believed to be a hybrid of a papeda and a mandarin. In 1914, Frank N. Meyer, a plant explorer for the USDA, found Yuzu (which he originally named Kansu orange) growing wild in the southern part of Gansu province among palms, loquats and bamboo. He estimated that the temperatures in that area dipped to 10F, and no other cultivated citrus grew nearby. He collected seed and sent it back to the United States.

Later in 1922, Tanaka discovered that the Kansu orange was identical to the Yuzu accession that the USDA had already held for several years in their greenhouses. It was then believed that Yuzu was probably imported prior to the 1900s by Japanese immigrants for use in their own gardens in the U.S. (Karp, 2003). The CVC received seed of this accession in 1918, a few months before Meyer’s untimely death. With the seed, Meyer included a description stating that it was “collected from the Hubei province, China, along the Yangtze River, in a field on a slope at the elevation of about 4,000 feet.”

Currently there are numerous Yuzu selections and hybrids in Japan and China, some of which originated from seedlings that germinated in the fruit waste of ancient dwellings (Taninaka, 1981). Japan and Korea are currently the largest producers of Yuzu fruits (Sawamura, 2005). Yuzu is commonly used for cooking because its rind is very fragrant; it is used for enhancing flavors in many dishes including soups, fish, candies and medicinal teas. There have been a few reported studies of the uses of essential oils of Yuzu peel in cosmetics and aromatherapy (Sawamura, 2005). A sauce made with juice from the fruit, called Ponzu, serves as a vinegar substitute. Jams, jellies and marmalades are also prepared using the juice, as well as beverages and liqueurs (Abkenkar, 2003). The fruits are used in nearly all stages of maturity, from young with a green rind to over-mature, puffy, and with a dark yellow rind.

Yuzu fruit was formally evaluated by the UCR Citrus Variety Collection in September and October of the years 2003 to 2007, both at Riverside, Calif., and at the Lindcove Research and Extension Center near Exeter, Calif. The average fruit has a mean width of 4.73 cm (1.9 inches) and a height of 4.31 cm (1.7 inches), giving an average height-to-width ratio of 0.90 and an oblate shape, and a mean weight per fruit of 52 grams (1.83 ounces). Rind color break for citrus fruit occurs at a rating of 4, where the rind color changes from a dark green to a yellow-green, which would be a rating of about 6. Yuzu consistently reached color break during the first week of October. The rind texture is pebbly and rough, with a mean thickness of 3.9 mm (0.15 inches), where a lower number such as 2.5 means thinner rind. Fruit samples from Lindcove generally have thicker rinds than those from Riverside, a warmer location. Yuzu averaged 27.7 seeds per fruit, but since it is primarily used for its peel and juice, not consumed fresh like navel oranges or mandarins, seed content is not of evident concern. The rind is not easily peeled in the green stage, but peels better when the fruits are mature. The mean juice weight per fruit is 10.0 grams (0.35 ounces) and the average juice content is 18%, most likely due to the presence of numerous plump seeds. There was an increase of juice percentage during the sampling dates. The internal flesh color of Yuzu in the green stage is light green to pale yellow. As Yuzu is highly acidic with an average of 4.5% citric acid, it is used much the way lemon would be used in the U.S.

The tree shape and growth habit of Yuzu is upright, spreading and moderately vigorous. Older non-pruned trees tend to have tall, rigid branches. Thorns up to 5 mm in length are present in each leaf axil. Leaves are elliptical in shape with a winged petiole of medium width. The tree canopy has medium density branching. Twenty-six-year-old trees on Carrizo and C-35 citrange rootstock are fairly vigorous and approximately 14 feet tall at Riverside, Calif. There have been no indications of rootstock-scion incompatibility or disease susceptibility using these rootstocks."

11/24/1917, F.N. Meyer: "A very spiny wild tree, Ht. 18 ft.; foliage dense, but individual leaves small; winged petioles quite minute; fruits fairly juicy; the size and shape of a tangerine; rind of bright yellow color; and corrugated, but not excessively so; odor very pleasing. Seeds large but not very numerous. In regions where this wild Ichang lemon occurs, one also finds coir palms, loquats, bamboos, large-leaved evergreen privets and Cunninghamia lanceolata. Temperatures probably never go below 10ºF . The local name of this wild lemon was given as Chu gan tze meaning 'Maggot orange' since maggots are said to be attracted by the very sour juice. No other cultivated citrus fruit occurred nearby though a few hundred feet lower down, several large pummelo trees were seen. The natives have little use for the fruit; they keep a few in the room to perfume the air and occasionally they use the dried rind in a medicinal tea. In breeding experiments it may be of value since it seems to be the hardiest of all the real species of citrus.

11/13/1989, EMN: According to Shu Yuan Wan (4/84 visitor to CRC), Chu means bad or bitter smell and gantze means orange. Tree & fruit here seem to fit above and C.I. descriptions fairly well (came to us as seed). More seeds here than "not very numerous".

This well-known citrus fruit tree of China and Japan is doubtless another ichandarin resulting from an accidental cross-pollination of some cultivated variety of the mandarin orange by the Ichang papeda, probably accomplished by some insect.  The Yuzu is unlike either parent species in many important taxonomic characters; however, there has been little opportunity to learn its characters or experiment with it since one parent, C. ichangensis, is a wild species (apparently never cultivated in China) that was not discovered until 1913.   The hybrid nature of the Yuzu was not known even in the Orient, where C. ichangensis is a botanical curiosity.   As has been describe above, hybrids that show astonishing similarity to the Yuzu have now been produced in this country between the Ichang papeda and the satsuma orange (a form of C. reticulata).

The Yuzu is sparingly cultivated in north-central China, in Kiangsu, Chekiang, Hupeh, and Kansu provinces, and in the plateau regions of southwestern China and as far south as Yunnan Province.   It is more commonly grown in Japan, both for its acid fruits, which are used as a substitute for lemons or limes, and as a rootstock for the satsuma and other cultivated varieties of citrus fruits.

Meyer, in October, 1914, found this hardy citrus fruit tree in northwestern China, in the latitude of Atlanta, Georgia, at Hsi-Chi village, near Siku (Lat. 33° 44' N., Long. 104° 30' E.), in the southern part of Kansu Province.   It was growing at an altitude of 610 to 1,372 meters (2,000 to 4,500 ft.) along with walnuts, persimmons, pomegranates, and the Trachycarpus palm.   Meyer (1918) described the fruit as follows: "The fruits were loose-skinned, round flattened, the size of mandarin oranges, color of rind light yellow; rind full of oil glands, smelling like a fine lemon; segments separating easily; fairly juicy and of an agreeable sharp sour taste; contains plenty of large seeds."   Meyer's photograph, taken at His-Chi, Kansu Province, was published by Tanaka (1922, pl. facing p. 243).

Tanaka has directed attention (1933b) to certain Chinese records which seem to prove that this plant was known and cultivated in ancient China under the name yu.   This name is still used for it in Japan but not in China, where the name is now applied to the pummelo (C. grandis), a very different species having much larger fruits with agreeably flavored sweet pulp.   The Yuzu is now called ch'êng tzu in China and was so called as early as 1108 A.D. by Tang Shên-wei in his great illustrated herbal, the Chêng lei pên ts'ao, published in that year.

In the "Spring and Summer Annals" of Lü Pu-wei, who died in 237 B.C., the yu of that epoch was described as follows (as translated by Michael J. Hagerty): "Some are sweet and some are sour.   The sour are called hu kan or Barbarian sweet.   At present the common people sometimes speak of the ch'êng as yu but this is wrong."   This last sentence proves, as noted by Hagerty, that there were already in the third century B.C. two different fruits called yu.   It seems probable that the Japanese name yuzu, which corresponds to yu tzu in the Chinese spoken language, has been kept with its ancient meaning in Japan, but that the meaning has for many centuries been lost in China.

The Yuzu was named Citrus junos (as a good species) by Tanaka, but, as has been shown above, it is very probably a hybrid of the Ichang papeda and some Chinese cultivated variety of the mandarin orange and therefore cannot be recognized as a good botanical species.

The Yuzu is worthy of trial as an acid fruit for the home garden in subtropical or warm-temperate climates that are too cold to permit the growth of other acid citrus fruits.   The Yuzu was formerly used widely in Japan as a rootstock for the satsuma orange, but now the trifoliate orange is almost exclusively used in nurseries which propagate the satsuma on a large scale, doubtless partly because seeds of the Yuzu are only to be obtained in moderate quantity from fruits that have a market value, whereas trifoliate orange seeds can be had in large quantity from fruits that are of no value.

Nagai and Takahashi (1928, pp. 2018-22, and 1925 [in Japanese]) found that of the five following rootstocks—Yuzu, sweet orange, sour orange, trifoliate orange, and Japanese summer orange (Natsudaidai)—the Yuzu gave the best results when approach-grafted in order to rejuvenate Thomson navel trees on trifoliate orange rootstocks.   The sweet orange did nearly as well, but it is subject to foot rot, a disease that does not attack the Yuzu. 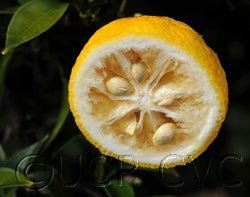 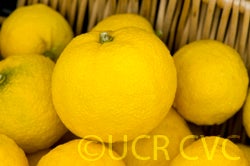