Originated as a limb sport in a tree of the Walters variety in an orchard near Ellenton, Florida, by R.B. Foster in 1907.

This variety originated as a limb sport in a tree of the Walters variety in an orchard near Ellenton, Florida, and was discovered in 1907 by R. B. Foster of nearby Manatee.  It was introduced in 1914 by the Royal Palms Nurseries, Oneco.

Foster is of horticultural interest primarily because it is the first pigmented grapefruit variety of record in Florida.  As such, it attracted considerable attention and was planted to a limited extent both in Florida and Texas.  With the advent of the seedless pink-fleshed Thompson variety only ten years later, however, interest in Foster declined abruptly and it has not been planted for many years.

Another reason for horticultural interest in this variety is the fact that in Texas it gave rise by bud mutation to the seedless pink-fleshed variety, Foster Seedless, which closely resembles Thompson but exhibits somewhat better flesh coloration.  Nucellar seedlings of Foster also possess more intense pigmentation than the parent clone." 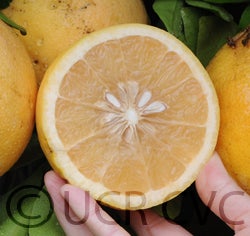 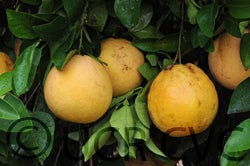 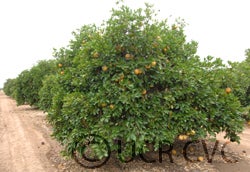