7/2007, RRK: 'Clementine' originated as a chance mandarin seedling in the gardens of an orphanage and so its parentage is not definitively known. Trabut noticed the plant, selected it, and suggested the name 'Clementine' after Brother Clement (Chapot, 1963). Trabut (1902a, 1902b, 1926) concluded that the seed parent was the common 'Mediterranean' mandarin (C. deliciosa) and the pollen parent was C. aurantium cv. 'Granitos'. However, this was disputed by Webber (1943) and Tanaka (1954). Chapot (1963) "has refuted it with convinving evidence" (Hodgson, 1967), concluding that 'Clementine' is indistinguishable from and probably identical to 'Canton' mandarin. The similarities between these two types were also noted by Trabut (1926) but "apparently escaped the notice of Tanaka (1954), [who gave it] the species designation clementina." (Hodgson, 1967).

1986, EMN: Monoembryonic. Since Clementine is monoembryonic, it must have been imported as budwood; therefore it follows that probably all of Dr. Fawcett's 1914 imports came in as budwood.

7/2007, RRK: The clementines consistute a distinctive type of mandarin widely grown in the Mediterranean basin. The 'Clementine' is the original selection. More recently, many other selections with distinctive characteristics have been made in Spain, Morocco, Corsica, and other Mediterranean basin countries. Saunt (2000) has concise descriptions of the most important of these selections.

"Climatically, the distinctive features of the Clementine variety are its low total heat requirements for fruit maturity and the sensitivity of the seedless fruit to infavorable conditions during the flowering and fruit-setting period. In regions of high total heat, the Clementine matures very early -- only slightly later than the satsuma mandarins. Such regions also favor production of fruit of maximum size and best eating quality....With reference to sensitivity of seedless fruits, however, the almost universal experience has been one of uncertain and irregular bearing behavior because of excessive shedding of younf fruits during the fruit-setting period and a few weeks thereafter. Moreover, it has been noted that shedding is correlated with the seed content of the fruit...the bearing behavior...can be regularized by cross-pollination.

In descending order of effectiveness as pollinators in Morocco, Chapot (1963) lists the sour or bitter orange, the Mediterranean, Dancy, and Wilking mandarins, the lemon, and the sweet oranges, including Valencia. Soost (1963) recommends the use of Dancy and Wilking in the Coachella Valley of California...It should be pointed out, however, that the warm, equable, coastal regions of western Morocco enjoy climatic conditions that are normally favorable for fruit setting and permit the production of good crops of virtually seedless fruit. Because of the high total heat, the fruit is exceptioanlly early in maturity...under conditions less favorable for fruit setting, it has been shown that regularity of bearing and increased production resuls from adequate nitrogenous fertilizer and efficiency in irrigation. Finally, it has been demonstrated that bearing can often be regularized and increased by means of girdling or ringing and light pruning -- a tree management practice distinctive to the culture of this mandarin. The procedure recommended consists of biennual double-girdling--at full bloom and the end of bloom, respectively--alternated with light pruning to stimulate the development of new shoot growth." (Hodgson, 1967)

The accession maintained at Riverside is directly descended from the introduction from Florida, which in turn was directly derived from the introduction from Algeria. A separate introduction to California was apparently made about 1914-1915 by Fancher Creek Nurseries, Fresno, whose catalog referred to a new mandarin from "Dr Trabut of the Government Experiment Station in Algeria". It therefore became referred to by growers as the "Algerian tangerine". This "Algerian tangerine" proved to be identical to 'Clementine' and Webber (1943) states that 'Algerian' should be considered as a synonym to 'Clementine'. However, the trees maintained at Riverside are descended directly from the original importation of 'Clementine' and this should be considered the proper name for this accession. This selection is most probably identical to the Spanish clementine selection 'Fina'.

Because 'Clementine' is monoembryonic, it is especially suitable as the seed parent in breeding programs. It has been extensively utilized for this purpose by the USDA citrus breeding programs in Florida and California (the latter now disbanded)."

"Fruit size variable, ranging from medium-small to medium; form likewise quite variable, with range from slightly oblate through globose to oblong and sometimes broadly pyriform from development of neck or collar; base usually rounded but sometimes collared or necked; apex depressed; occasionally with small navel.  Rind medium in thickness; moderately firm and adherent, but easily peelable and does not puff until well after maturity; surface smooth and glossy, but slightly pebbled because of prominent oil glands; color deep orange to reddish-orange, but not as red as Dancy.  Segments 8 to 12, slightly adherent; axis medium and open.  Flesh color deep orange; tender and melting; juicy; flavor sweet; subacid and aromatic.  Seeds very few to medium in number (depending on cross-pollination), monoembryonic, and cotyledons mostly green (some white).  Early in maturity.  While the rind puffs somewhat after maturity, on some rootstocks fruit holds on tree for several months with little loss in quality.

Tree medium in vigor and size, spreading and round-topped; branchlets fine-stemmed, willowy, and nearly thornless; foliage dense.  Leaves highly variable in size, narrowly lanceolate in form, and somewhat resembling the Mediterranean or Willowleaf mandarin.  In most locations, regular and satisfactory bearing is assured only by the provision of cross-pollination.  Tree strongly cold-resistant." 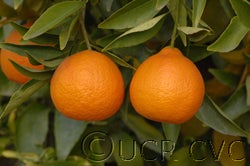 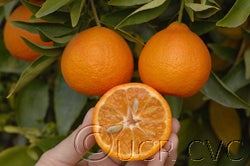 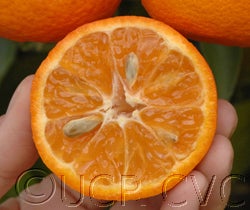 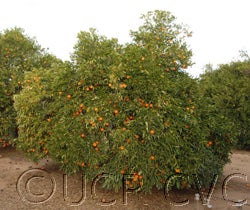 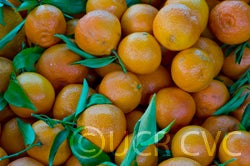